Remembering Marielle Franco: Solidarity with politically persecuted activists in Brazil and the U.S. 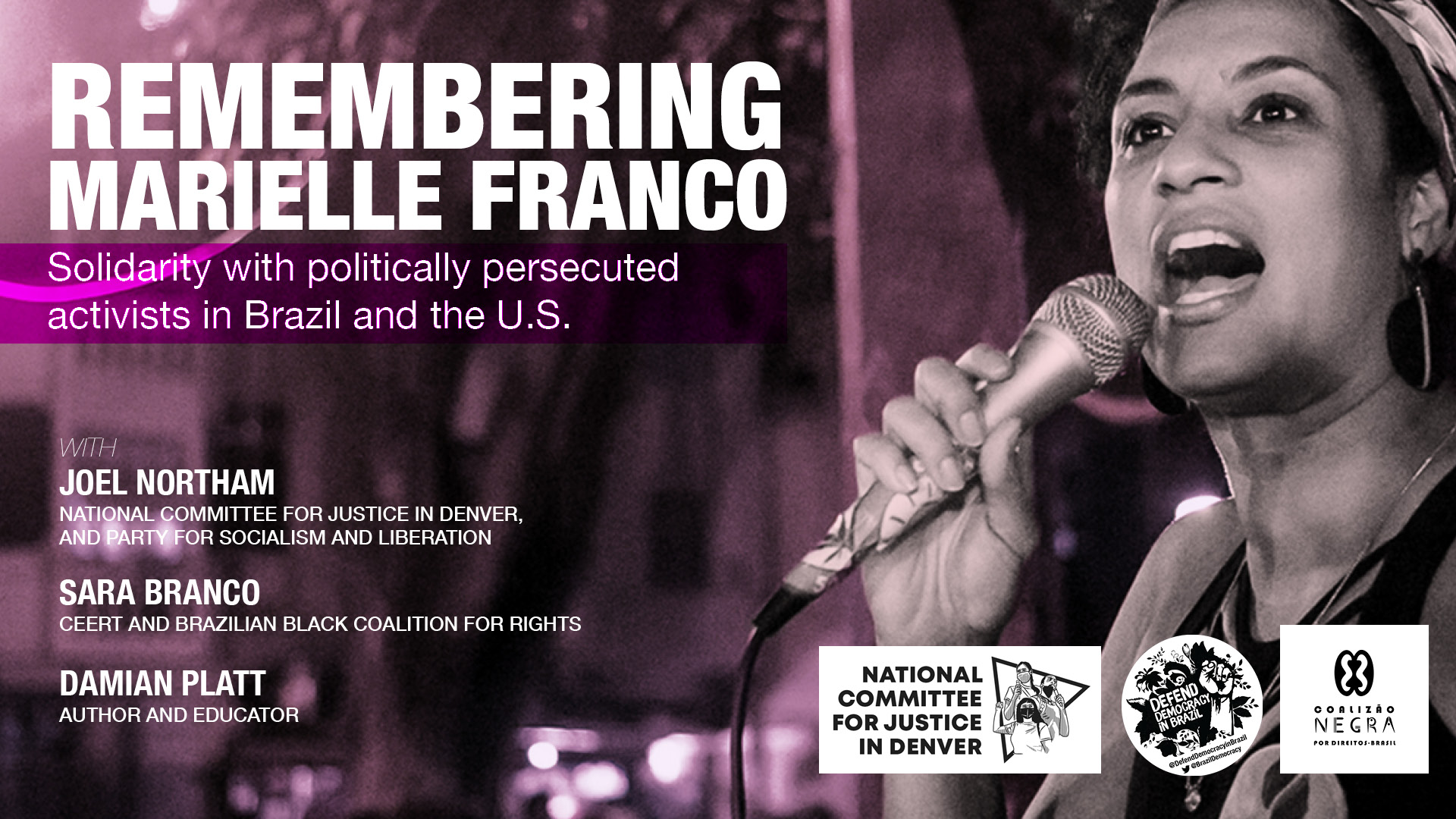 Joel Northam (National Committee for Justice in Denver, and Party for Socialism and Liberation)

Moderated by Juliana Valente – Anthropologist, member of the Defend Democracy in Brazil Committee

Simultaneous Portuguese interpretation will be available on Zoom

This event will also be livestreamed on The People’s Forum YouTube.

In this event we will review the key facts behind the brutal and yet unsolved assassination of Rio de Janeiro’s Councilwoman and activist Marielle Franco on March 14, 2018, and discuss the ongoing violent political persecution of activists fighting for social justice in Brazil and in the United States. Marielle, among the many social justice platforms that she fought for, stood against the militarization of the police known for brutalizing poor communities in Rio. For this, she paid with her life. We remember her courage and legacy.

To celebrate her life, the Defend Democracy in Brazil Committee in New York brings to the People’s Forum a debate on police and militia violence, political persecution, the fight for social justice, for #BlackLives, and an event of solidarity to activists.

In this event, author and educator Damian Platt will present some of his findings on the plot behind Marielle’s assassination, which he examines in his recent book; lawyer Sara Branco, from the CEERT and the Brazilian Black Coalition for Rights will discuss current antiracist movements, violence against Black Brazilian youth and the struggle for justice in Brazil; political activist Joel Northam will present the injustices against peaceful organizers of #BlackLivesMatter marches in Denver, who marched for justice for the police murder of the young massage therapist and violinist Elijah McClain, who was brutally attacked in Aurora, Colorado for being black, and died days later. Along with two other organizers from the Party for Socialism and Liberation, Joel was also brutally attacked and imprisoned in his home in Denver. They are currently being targeted for their right to free speech and for fighting for racial justice, and facing prosecution with threats of several years in jail, by the local District Attorney in Aurora.

We stand in unity with Brazilian lawmakers and activists who seek racial justice, with the National Committee for Justice in Denver, and with freedom and racial justice fighters, to unite and defend the right to protest.

About the speakers and organizers:

Joel Northam is an organizer with the Party for Socialism and Liberation and the ANSWER coalition. He has worked in the struggle against police terrorism since the Black Lives Matter movement took shape, and is active in anti-war struggles, building international solidarity that links oppressed nations people within the US to countries that are targeted by US imperialism.”

Sara Branco is a human rights lawyer advocating for the promotion of racial and gender equality. She is a project assistant and legal adviser at the Center of Studies of Labor Relations and Inequalities – CEERT, a 30 years Brazilian black organization. She is also a member of the Brazilian Black Coalition for Rights. Sara is currently based in São Paulo, Brazil.

Damian Platt was born in Nairobi, Kenya. Growing up in London, he studied modern languages at Edinburgh University. He subsequently spent eighteen months working with Redemptorist Catholic missionaries in Tocantins, in the northern interior of Brazil. There followed eight years at the International Secretariat of Amnesty International in London. In 2005, he relocated to Rio de Janeiro to work for AfroReggae, a favela-based youth and culture organisation, which he described in his book Culture is Your Weapon, co-authored with Patrick Neate. Later he teamed up with TED prizewinning French artist JR to work on his Women are Heroes project in Rio. In 2019, he mobilised a team of local and international volunteers to build a world-class skate park in the Maré favela complex. In 2011, he completed a Master of Studies in International Relations at Cambridge University – the same year he received an award from the British Government, for “services to community development and human rights” in Rio de Janeiro. He is a qualified teacher in the UK, since completing the Teach First leadership programme in 2018.

Juliana Valente is a member of the Defend Democracy in Brazil – NY chapter and a PhD candidate in Anthropology at the CUNY Graduate Center. Before coming to the US, Juliana worked for several years at an NGO in Brazil with youth who committed crimes. Her current research is focused on issues related to human rights, crime, violence, and youth in Brazil.

The National Committee for Justice in Denver is composed of constitutional rights lawyers, legal scholars, trade unionists, educators, journalists, clergy, human rights activists and others in social justice movements from all over the United States. We have come together in defense of free speech rights and in opposition to the dangerous campaign to criminalize dissent by charging peaceful protest leaders with serious crimes that could send them to prison for decades. On Sept. 17, 2020, multiple Denver-area police forces carried out a coordinated series of arrests of lead organizers of peaceful protests against police brutality. Three of the activists, Eliza Lucero, Joel Northam, and Lillian House, were held in jail for eight days in dangerous and degrading conditions before they were brought before a judge. They now face numerous felony and misdemeanor charges that could put them in prison for as many as 48 years.

It is a bitter irony that the leaders of peaceful protests demanding justice for Elijah McClain, a 23-year-old Black man murdered by Aurora police, are the ones who are now facing arrests and decades in prison. We have come together to mobilize public support throughout the nation to demand that the political prosecution of these social justice activists be dropped. Justice requires nothing less! https://www.denverdefense.org/about

Defend Democracy in Brazil Committee (DDB- NY) is a group of Brazilians and allies fighting for democracy in Brazil and the Rule of Law, since before the illegal impeachment of President Dilma Rousseff in Brazil, elected with 54 million votes and ousted for minor administrative charges. Since then, and with the political imprisonment of President Lula, DDB-NY has staged more than 110 public actions and protests in New York City, among which many were performances. DDB works to change fake narratives in the media, and has written and published dozens of Open Letters, Manifestos, Statements, denouncing the illegalities and retrocess in Brazil’s public policies since 2016. It also helped organize the #cancelBolsonaro coalition, which contributed to the cancellation of his visit to New York for an award in May 2019. To learn more about what we did, what we do and how to engage, visit our pages on Facebook, Instagram and Twitter ( @BrazilDemocracy). For more details, visit: https://www.defenddemocracyinbrazil.org