Barbara Foley is Distinguished Professor of English at Rutgers University, Newark. She has published widely in the fields of Marxist criticism, US literary radicalism, and African American literature. Her books include Marxist Literary Criticism Today (Pluto, 2019), Wrestling with the Left: The Making of Ralph Ellison’s Invisible Man (Duke University Press, 2010) and Spectres of 1919: Class and Nation in the Making of the New Negro (University of Illinois Press, 2003).

Past Classes with Barbara Foley 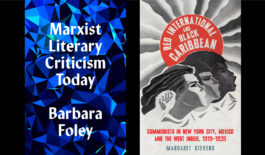 Please join us for a discussion and reception as we celebrate the launch of two groundbreaking works by mother and daughter scholars and authors Barbara Foley and Margaret Stevens.
Event Categories:
Book Talks, Classes, Education