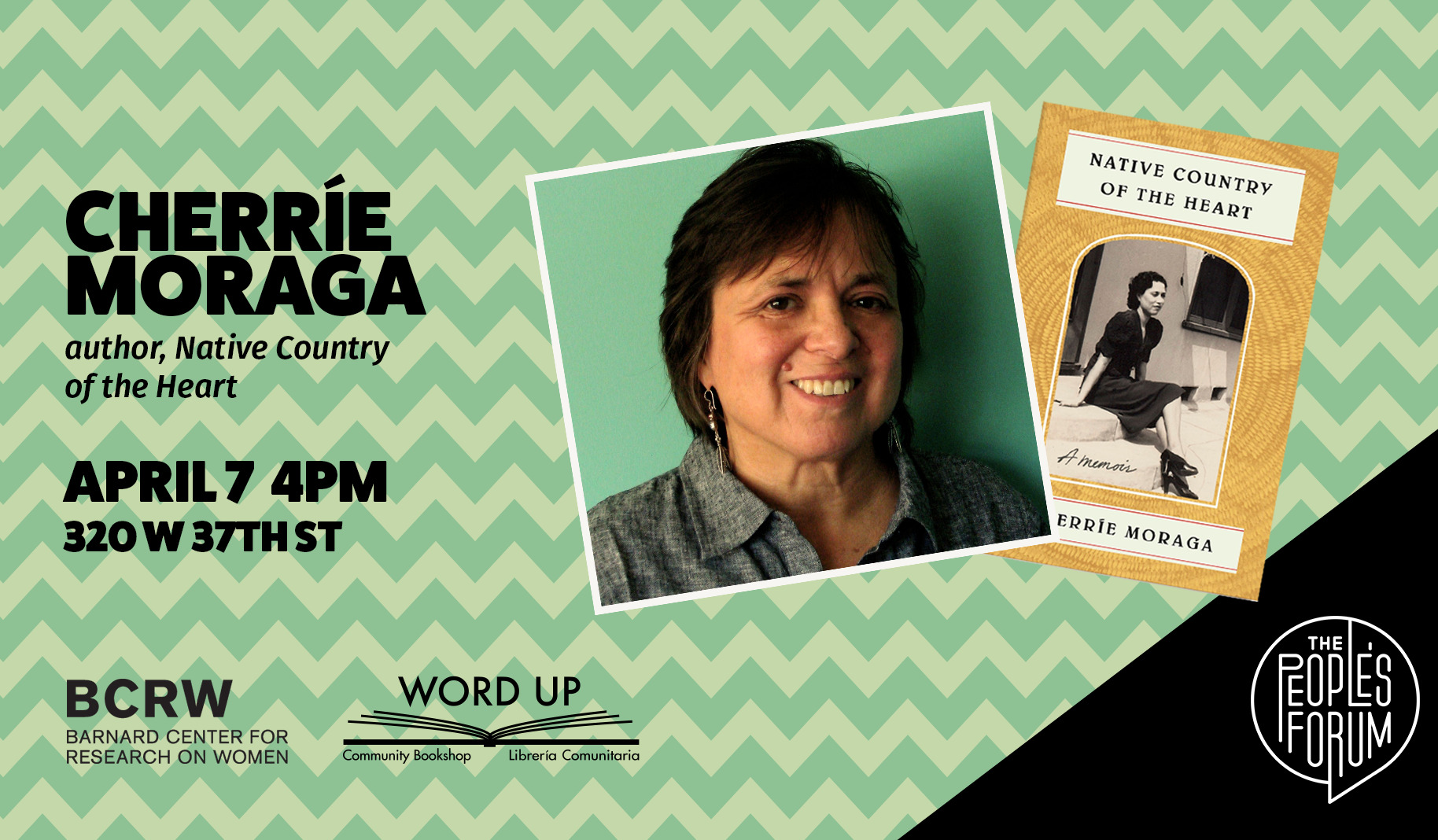 Join us and Word Up Community Bookshop/Librería Comunitaria in presenting Cherríe Moragaon Sunday, April 7th. Cherríe—the celebrated coeditor of the groundbreaking anthology This Bridge Called My Back: Writings by Radical Women of Color—will present her new memoir, Native Country of the Heart, in conversation with Claudia de la Cruz, Director of Culture at The People’s Forum. This event is co-sponsored by Barnard Center for Research on Women

In this book Cherríe Moraga charts her own coming-of-age alongside her mother’s decline, and also tells the larger story of the Mexican American diaspora. Native Country of the Heart: A Memoir is, at its core, a mother-daughter story. The mother, Elvira, was hired out as a child, along with her siblings, by their own father to pick cotton in California’s Imperial Valley. The daughter, Cherríe Moraga, is a brilliant, pioneering, queer Latina feminist. The story of these two women, and of their people, are woven together in an intimate memoir of critical reflection and deep personal revelation.

CHERRÍE MORAGA is a writer and cultural activist whose work disrupts the dominant narratives of gender, race, sexuality, feminism, indigeneity, and literature in the United States. A cofounder of Kitchen Table: Women of Color Press, Moraga coedited the influential volume This Bridge Called My Back: Writings by Radical Women of Color (1981). In 2017, after twenty years as an Artist-in-Residence in Theater at Stanford University, Moraga was appointed a professor in the Department of English at the University of California, Santa Barbara, where, with her artistic partner Celia Herrera Rodríguez, she founded Las Maestras Center for Xicana Indigenous Thought and Art Practice. She is a recipient of a National Endowment for the Arts Theatre Playwriting Fellowship Award and a Rockefeller Fellowship for Literature.

CLAUDIA DE LA CRUZ was born in the South Bronx to immigrant parents from the Dominican Republic. She is a popular educator, community organizer and theologian. In her role as Director of Culture at The People’s Forum, Claudia is committed to contribute her experiences and skills in the creation of cultural-educational space with organizers, educators and cultural workers/artists to continue producing, promoting and uplifting the cultural traditions that nourish and strengthen our communities in our struggles towards social justice. For over 20 years, she has been committed to movement building and has actively participated in collective grassroots spaces, particularly in the communities of Washington Heights and The South Bronx.

GET YOUR TICKETS HERE!