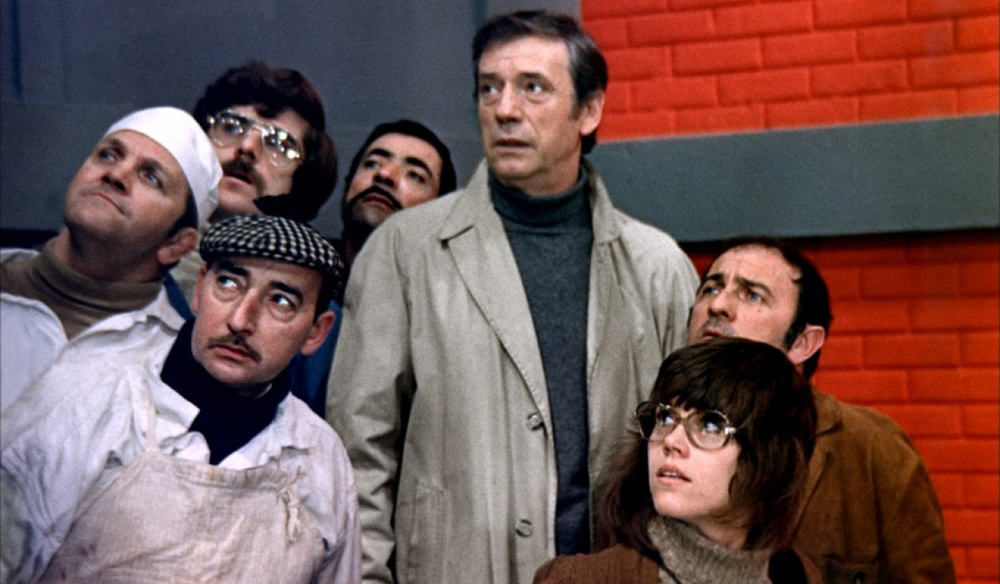 Godard and Gorin’s film, unpopular and hardly viewed when released, emerges nearly 50 years later as a film with increasing relevance to the days as lived during this late capitalist period. One can see many of the participants in this film wearing gilets jaunes if the film were being shot today.

From the Criterion re-release:

“As cinema, Tout Va Bien is radically simplified and blatantly diagrammatic. After the opening sequence, the Fonda character arrives at a sausage factory to do a story on modern management techniques. Montand tags along, and, as the workers have just staged a wildcat strike, the visiting celebs soon find themselves “sequestered” with the factory’s clownish boss. The approach is self-consciously Brechtian: The characters frequently address the camera. These characters are characters and the set on which they appear is an obvious set…Tout Va Bien insists on class struggle throughout but is mainly about radicalizing its stars. Their role in the factory is to look and learn. Indeed, Godard and Gorin upped the class-resentment ante by having the striking workers played not by real workers but by unemployed actors.”              —J. Hoberman, for Criterion, Tout Va Bien Revisited