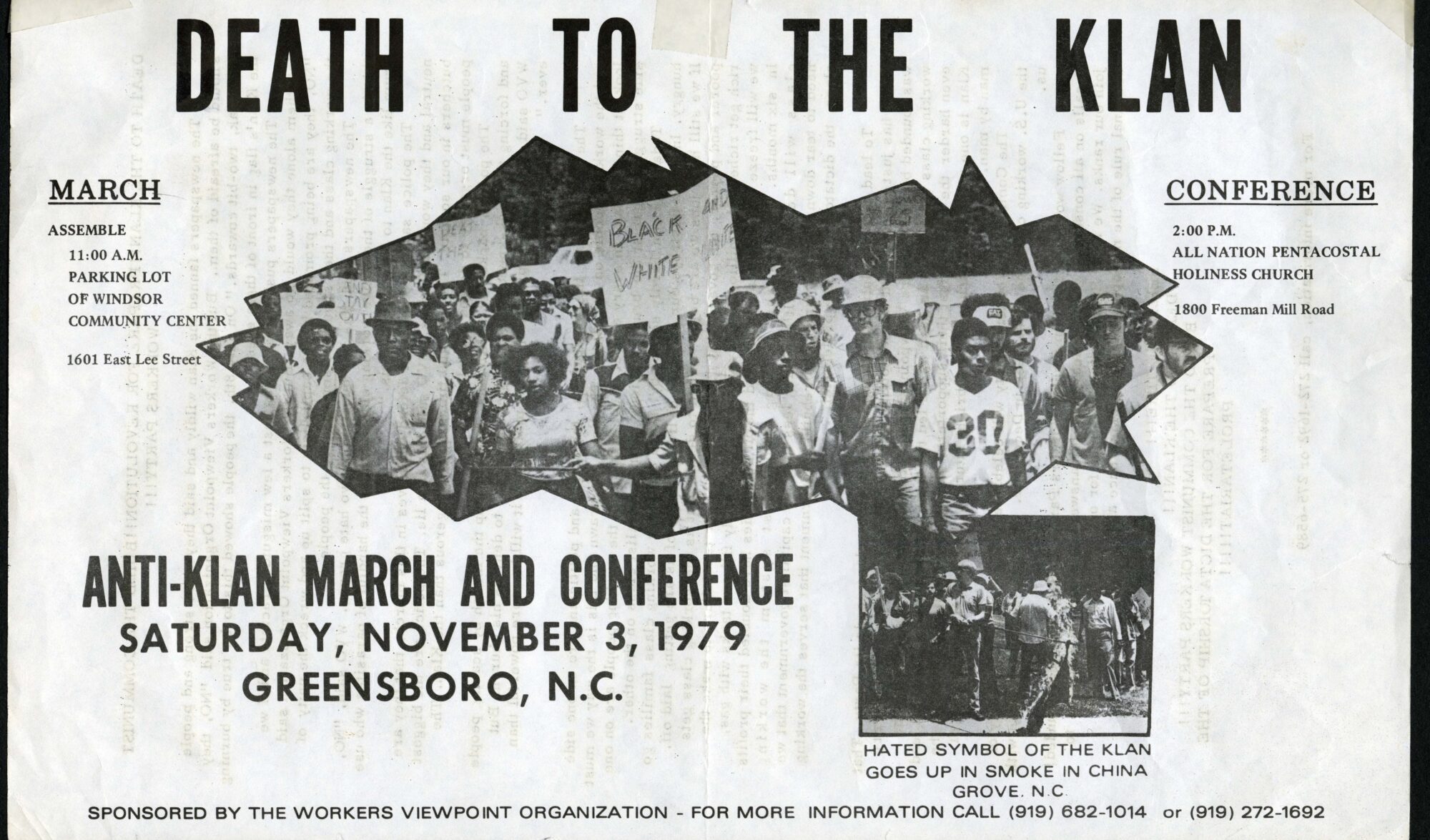 On Nov. 3, 1979 in Greensboro, NC, a caravan of Ku Klux Klan and American Nazi Party members drove into Morningside Homes, a public housing project in Greensboro’s Black community, and opened fire on demonstrators preparing for an educational conference organized by the Communist Workers Party, to be preceded by a march to the conference site.

The shots killed labor and community organizers Sandi Smith, Dr. Jim Waller, Bill Sampson, César Cauce, and Dr. Michael Nathan. Five years later, after the attackers had been acquitted twice by local all-white juries, a federal civil trial finally established that the murderers had been organized and encouraged by a paid police informant and a federal agent.

Immediately after the murders, the police and political leadership of Greensboro mounted a full-court press to blame the victims. Compounding the tragic loss of five beloved young friends, the survivors were jailed, vilified, fired from their jobs, and some of them were charged with “felony riot” which would have resulted in long prison sentences for causing the deaths of their own friends. In the midst of all of this, Sally Alvarez and Carolyn Jung produced a film, “Red November, Black November,” documenting the tragedy. The film premiered in March of 1981, less than 2 years after the murders, and stands as a raw record of the truth of the massacre and its immediate aftermath, as seen by the survivors, their community, and the leadership of the CWP. This is a rare public showing of that record.

The showing of the film will be followed by a conversation between the filmmaker, Sally Alvarez, and composer/playwright César Alvarez. César is Sally’s second-born child, who grew up in Greensboro in the shadow of the Greensboro Massacre and is named for two of the victims, César Cauce and James Waller. César is currently writing a musical about the murders entitled The Potluck.

Sally Alvarez was born in Greensboro, NC, and grew up in Georgia. She has lived in the South for most of her life. After producing a number of documentary films on civil rights, labor rights, and social justice topics, she worked for 20 years as a labor educator for Cornell’s School of Industrial Relations in New York, where she also taught Southern labor history. She retired in 2019. She lives in Yonkers with her husband of 46 years, Joe.

César Alvarez is a New York-based, North Carolina born, composer, lyricist, playwright, and performance maker. They have written five full-length musicals, FUTURITY (2016 Lortel Award for Outstanding Musical); The Elementary Spacetime Show; The Universe is a Small Hat (Upcoming: Princeton University); NOISE (a commission of The Public Theater); and The Potluck. César is a 2018-20 Princeton Arts Fellow and a recipient of The Jonathan Larson Award.