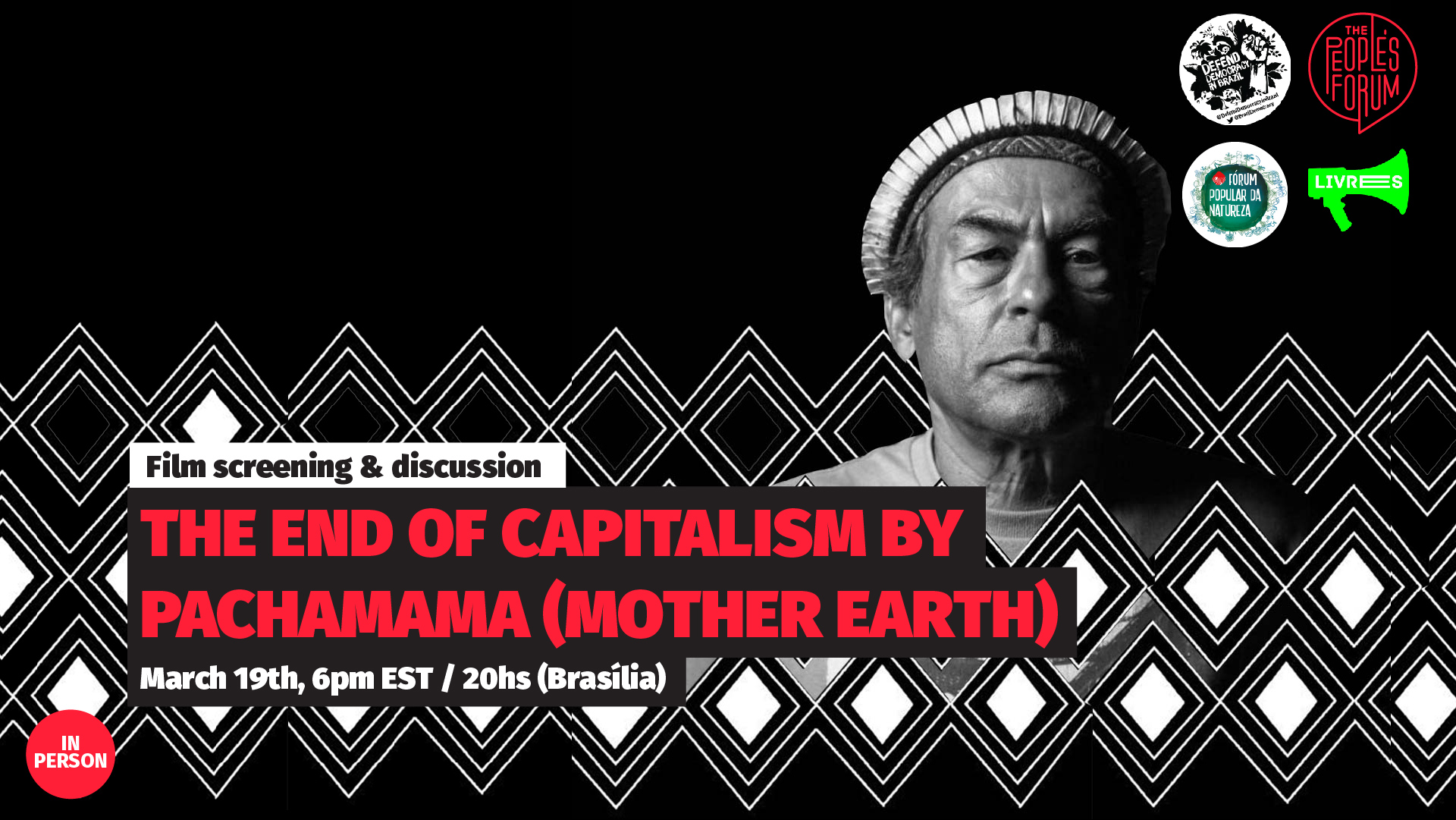 A film screening of an interview with Brazilian indigenous activist Ailton Krenak, on his long-time activism to protect Mother Earth and fight against capitalism. The in-person screening will be followed by a virtually held discussion with a young indigenous leader and activists working in environmental reforestation, food security and decarbonization solutions in Brazil, and against land-grabbing by large financial institutions.

Screening is in Portuguese with English subtitles. Discussion will be in English and Portuguese.

About the activist featured, Ailton Krenak:

Indigenous leader Ailton Krenak shows his indignant and revolutionary face: “We are being massacred. We need to respond accordingly” Text By Laura Capriglione (Jornalistas Livres)

Brazilian indigenous leader, environmentalist, philosopher, poet and writer Ailton Krenak is one of the most powerful voices in defense of  indigenous peoples and their culture. In this documentary-interview, Ailton Krenak is indignant at the recent attacks by miners against Yanomami men, women and children and the genocidal government of Jair Bolsonaro. But he goes much beyond that criticism. Krenak presents himself as a lucid and fierce critic of the Capitalist system and consumer society.

Supported by the life philosophy of indigenous peoples, Ailton Krenak, who is the author of the book “Tomorrow Is Not for Sale”, points to a new type of social organization, both necessary and possible, based on respect for Nature and Life.

This documentary is the result of a first-time collaboration between Jornalistas Livres and Fórum Popular da Natureza. At a time of global climate and health crisis, we hope that this joining of independent media with environmental militancy will bear fruit. As it is necessary to invent a new way of living on this planet.

About the Panel Speakers

Isabela Kojin Peres has a Bachelor’s in Environmental Management and a Master’s in Science from the University of São Paulo. She is finalizing her PhD in Applied Ecology through the Interunits Program at the University of São Paulo. She is researching social participation in processes of restoration of the Brazilian Atlantic Forest. She is a member of the Education and Environmental Policies Lab (Oca), of the National Network for Public Policies in Environmental Education (ANPPEA), and of the Nature People’s Forum, where she is the coordinator of the People’s School on Nature.

Orome otumaka Ikpeng is 29 years old. He is a member of the Ikpeng people and from the Moygu tribe, which is part of the Xingu Indigenous territory in the state of Mato Grosso (Brazil). He is an environmental activist and activist for the rights of indigenous people, as well as a technician in Agroecology. He has worked at the Association Network of Seeds from the Xingu since 2009. He participates in indigenous social movements in Brazil. He works with the Yarang women’s movement, who collect seeds to be used in the reforestation of the springs and headwaters of the Xingu and Araguaia (Mato Grosso) rivers.

Thomas Hamre is an international policy and climate advisor with a MSc in Climate Change Management. He has worked as a consultant in the climate change and food security policy sector in the UK, Norway and Brazil, advising on decarbonisation strategies. Thomas is a co-founder of Fórum Popular da Natureza and a director of AmazoniAlerta.