Nokuthula Mabaso: Fighter in the Struggle for Land and Dignity 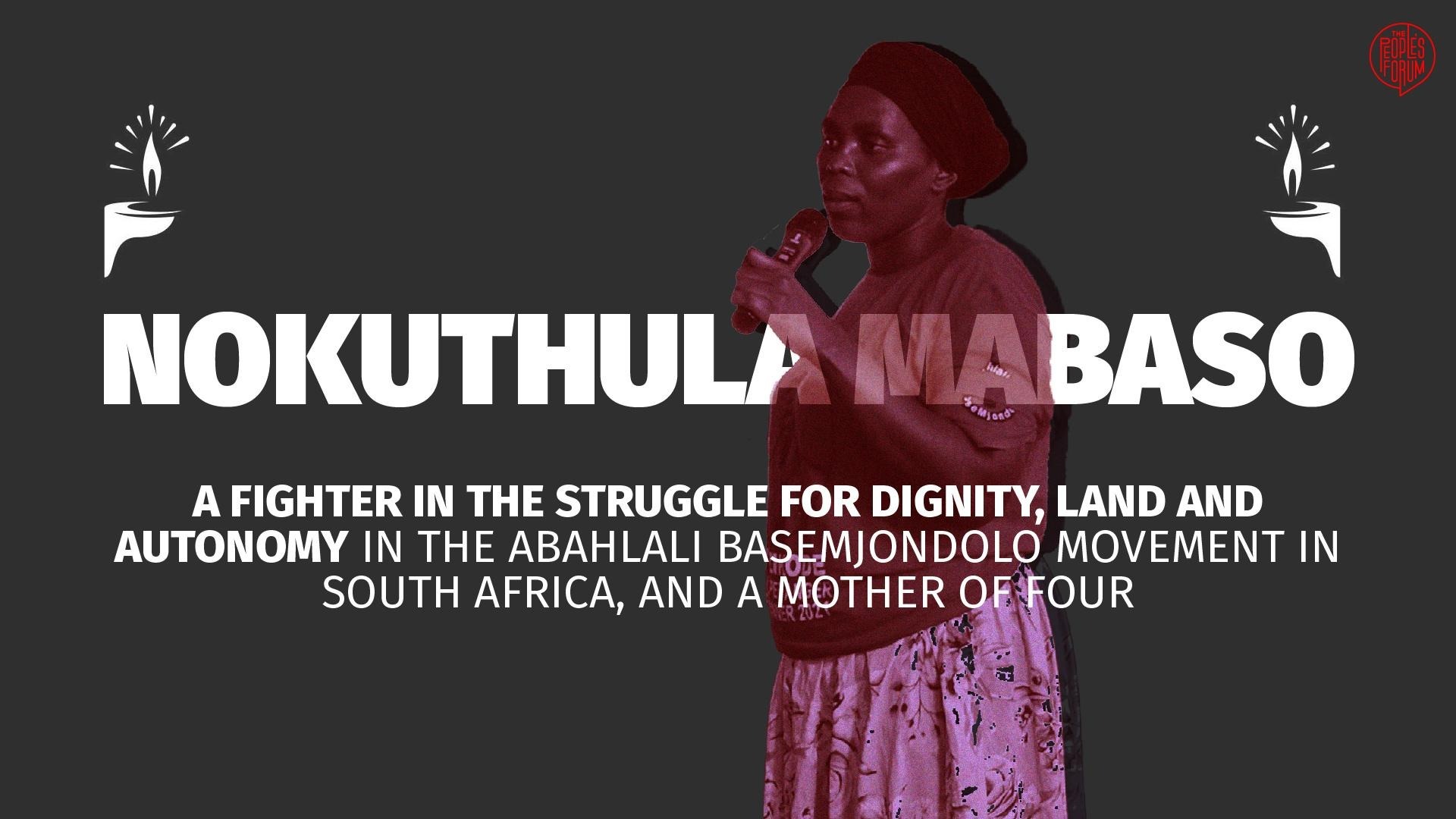 The eKhenana Commune has been under ruthless attack for years. There have been more than thirty illegal and violent evictions, including evictions in violation of court orders. People have been assaulted, had their homes burnt, been arrested on trumped up charges and jailed for long periods.

On 8 March 2022 Ayanda Ngila, a young leader in the Commune who had twice been jailed on ridiculous charges, was assassinated. Last night, 5 May 2022, at around 7:30 pm, another leader in the Commune, Nokuthula Mabaso, was assassinated. She was forty years old. A soldier in our movement who ensured that more than a hundred families have land and roof over their heads is no more.

As well as being a powerful leader in eKhenana and the Women’s League Nokuthula was also a key figure in the establishment and management of the chicken farm that was part of the very successful food sovereignty project at the Commune. She spent time in prison with Maphiwe Gasela and Thozama Mazwi on fabricated charges.

Yesterday during the afternoon she was part of the team that was processing food received as part of the movement’s food solidarity programme after the floods. In the early evening she was in a meeting of comrades who were making plans to attend a court case today. Khaya Ngubane, the son of NS Ngubane, the local ANC chief who has been driving the attack on the Commune, is scheduled to appear in court today. Nokuthula was attacked when she left the meeting to go to her house and attend to a pot of rice that she was preparing for her children. She was shot five times, four at the back in front of her children. The other women rushed to her when they heard the gun shots. She was still alive when they found her. She died in their hands.

Witnesses saw Khaya Ngubane murder Ayanda Ngila on 8 March but today’s court appearance is about the time that he attacked Sniko Miya with an axe on 6 March. The investigating officer for the this case is saying that he cannot find any evidence to implicate Ngubane in the attack on Sniko, but he has not spoken to the witnesses. The same officer has been involved in arresting our members on trumped up charges and recommending that they be denied bail.

Previously NS Ngubane clearly said in the court building that ‘there will be bloodshed in eKhenana’.

Nokuthula had prepared an affidavit that was going to be used in court today at the bail hearing of Ngubane. Her affidavit explains that it would not be safe for the community, and especially for witnesses to the axe attack and the murder, if Ngubane was granted bail. Her affidavit, along with an affidavit by Maphiwe Gasela, explains that the witnesses to Ngubane’s crimes, who are women, would be at severe risk if Ngubane were to be released and that, in the interests of justice, he should be remanded in custody.

Nokuthula was one of a number of people who witnessed the murder of Ayanda, and could potentially have been a witness if the matter went to trial. She was also the main respondent to the eviction case that was brought by the municipality in eKhenana. She played a key role in fighting for the occupation, and in turning the occupation into a Commune. She was brave in collecting all the information on the various cases that would have led to the arrest of NS Ngubane, and many others who have been behind the destruction of eKhenana.

We have no doubt that the local ANC in the area, led by this unscrupulous pastor NS Ngubane, is behind the assassinations of Ayanda and Nokuthula. As we have reported before NS Ngubane openly instructs the police at KwaKito (Cato Manor police station) who to arrest and who not to arrest and openly advises the prosecuting authority in the Durban Magistrates’ Court on how they should proceed with cases relating to our members.

We have built a Commune in which, according to the principles of Abahlalism, land is not bought and sold and shacks are not rented. The local ANC want the land in eKhenana to be used for private profit and not for communal purposes. The ANC is threatened by a woman who has led the occupation and continued with the Commune despite the severe repression over the years and when other leaders are in jail, in hiding or have been assassinated.

Whenever a leader emerges, she or he becomes a target of assault, trumped-up charges or assassination. The ANC are cowards. They are murderers. They are thieves. They are our enemy and the enemy of every person who stands for justice.

We have now lost twenty-three comrades to assassination, police murders and killings by the land invasion unit and municipal security since 2009. We have lost three activists in the last two months.

The ANC, the police, the municipality, the prosecuting authority and the magistrates who keep sending innocent people to jail after the police say that they have arrested to investigate (whereas they should be investigating to arrest) all need to be held to account for their role in the long, violent and criminal attack on eKhenana.

We note that the Minister of Police has ignored all our attempts to have him intervene. We note that the Human Rights Commission has not acted despite the fact that they have a report on this matter. We note that the national leadership of the prosecuting authority have not dealt with the crisis in Durban despite communication from us, and protests at their offices.

The Cato Manor police station is around 500 meters away from where Nokuthula was assassinated. The police confirmed that they heard gun shots but it took two hours for them to arrive at the scene. In fact the leadership had to drive to the police station to call them when calls were ignored. However, when Mqapheli Bonono was rushing to the scene police could stop him, harass him, delay him and fine him for a damaged light on the car he was using. They refused his request for them to accompany him to eKhenana.

The struggle for dignity, for land and autonomy, continues to mean death. Our hearts are broken.

Nokuthula was a solider. We will bury her will all due honour.

Nokuthula leaves her husband, Sibusiso Mhlongo, and four children: Nomfundo (23),
Siyanda (19), Kwanele (17) and Junior (5). Kwanele is living with a disability.