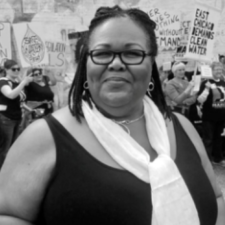 Sheilah Garland-Olaniran grew up in Flint, MI. As a child she walked the picket lines with her father who was a member of the United Autoworkers Union for 35 years.

Sheilah has organized across the country, most recently with National Nurses United, organizing Registered Nurses into the union from Nevada to Florida.

She is currently a member of the IL Coordinating Committee of the Poor Peoples Campaign: A National Call for a Moral Revival. She has been a board member of the National Welfare Rights Union.

Sheilah has for years been involved in leading the fight for a healthcare system for all in IL and across the country. She is active in the fight for environmental justice which is inextricably tied to the demand for healthcare for all. She is a member and activist in the Chicago Southeast Side Coalition to Ban Petcoke is a board member of the Southeast Environmental Task Force. Sheilah helped form and sits on the board of Reclaim Chicago, an IPO of National Nurses United and the Peoples Lobby.

Sheilah has lived in Chicago, IL, for the past 20 years.

Past Classes with Sheilah Garland-Olaniran