A Theater of the Oppressed trainer and popular educator who collaborated annually with Augusto Boal from 1990 until his death in 2009. She is a founding member of TOPLAB (1990) and the Institute of Popular Education at the Brecht Forum (1992). In addition to leading hundreds of workshops in the New York, she has facilitated sessions in numerous cities throughout the United States, as well as in Mexico City and the Mexican states of Chiapas and Tabasco, in Santa Cruz del Quiche in the Guatemalan highlands, in Guatemala City and in Cuba.

Past Classes with Marie-Claire Picher 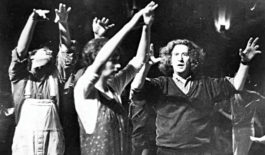 2 Day Theater of the Oppressed Training

In this 2-day workshop we will explore the technique of FORUM THEATER over two days. Participants will learn the basic skills needed to create, perform and lead the Forum Theater format for use in their respective communities. We will explore our bodies as a tool of representing feelings, ideas, and relationships and explore collective solutions to everyday problems.
Event Categories:
Classes, Culture, Education, Performances