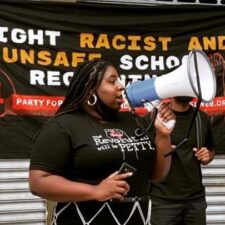 Kerbie Joseph is a first generation Haitian woman from Brooklyn, NY and a community organizer with the ANSWER  (Act Now to Stop War and End Racism) Coalition. Kerbie has been organizing since the age of 19 in NYC against police brutality, mass incarceration, housing insecurity and LGBTQTSTGNC oppression. Kerbie has organized and led the Stop The Cops unity march from the Bronx to Harlem, in solidarity for Trayvon Martin, Ramarley Graham and all police brutality victims. Kerbie is a lead organizer in the Justice for Akai Gurley Family campaign and works with many of the police brutality families in NYC. This work has led to a guilty verdict by a jury against the police officer responsible for Akai Gurley’s murder in 2014 and a street being named in Akai’s honor in the neighborhood he was killed by the NYPD in East New York on November 20th, 2021.  Kerbie has organized alongside many of the police brutality groups and progressive politicians in NYC. Kerbie has spoken at Yale University, Fordham University, NYU, Temple, CUNY, and at Adelphi University on above mentioned issues. Kerbie formerly worked as a youth counselor at the Ali Forney Center which is the largest LGBTQTSTGNC homeless housing shelter in NYC and at the Damayan Migrant Workers Association- where she found housing for labor trafficked survivors. Kerbie currently works at the Audre Lorde Project as the Safe OUTside the System program’s coordinator. There Kerbie teaches de-escalation, safety planning, safe space creation to households, shelters, businesses and to community members to buffer police interaction within marginalized communities.

Past Classes with Kerbie Joseph 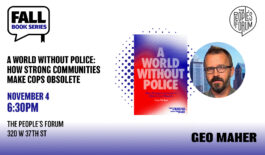 BOOK TALK: A WORLD WITHOUT POLICE

Join us at The People's Forum (320 West 37th Street) for a book talk and discussion with Geo Maher on his new book A World Without Police. This event is co-sponsored by Verso Books.
Event Categories:
Book Talks, Classes, Education, Panel Discussions