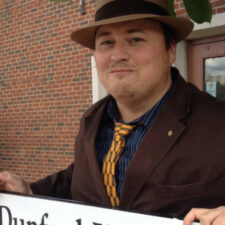 Bob Hutton is Senior Lecturer of History and American Studies at the University of Tennessee in Knoxville. He received his doctorate from Vanderbilt University in 2009 after studying history at Appalachian State University in NC and George Mason University in VA.

His first book, Bloody Breathitt: Politics & Violence in the Appalachian South (2013) received awards from the Appalachian Studies Association, the Appalachian Writers’ Association, the Kentucky Historical Society (where he was also a research fellow). His current project, tentatively titled Dixie’s Detectives: The Baldwin-Felts Agency and the Building of Appalachian Capitalism, is supported by the Jonathan G. Utley History Support Fund and the Mining History Association. Two of his recent essays were included in  Reconsidering Southern Labor History: Race, Class, and Power (2018), and the upcoming Appalachian Reckoning: A Region Responds to Hillbilly Elegy  from West Virginia University Press. More of his essays have appeared in The Tribune (UK), Jacobin, and the Society of US Intellectual History blog.

He is an active member of the United Campus Workers (Communication Workers of America, Local 3865).

Past Classes with Bob Hutton