Writing the Next Chapter: An intergenerational discourse on Fidel and Malcolm X-Memories of a Meeting 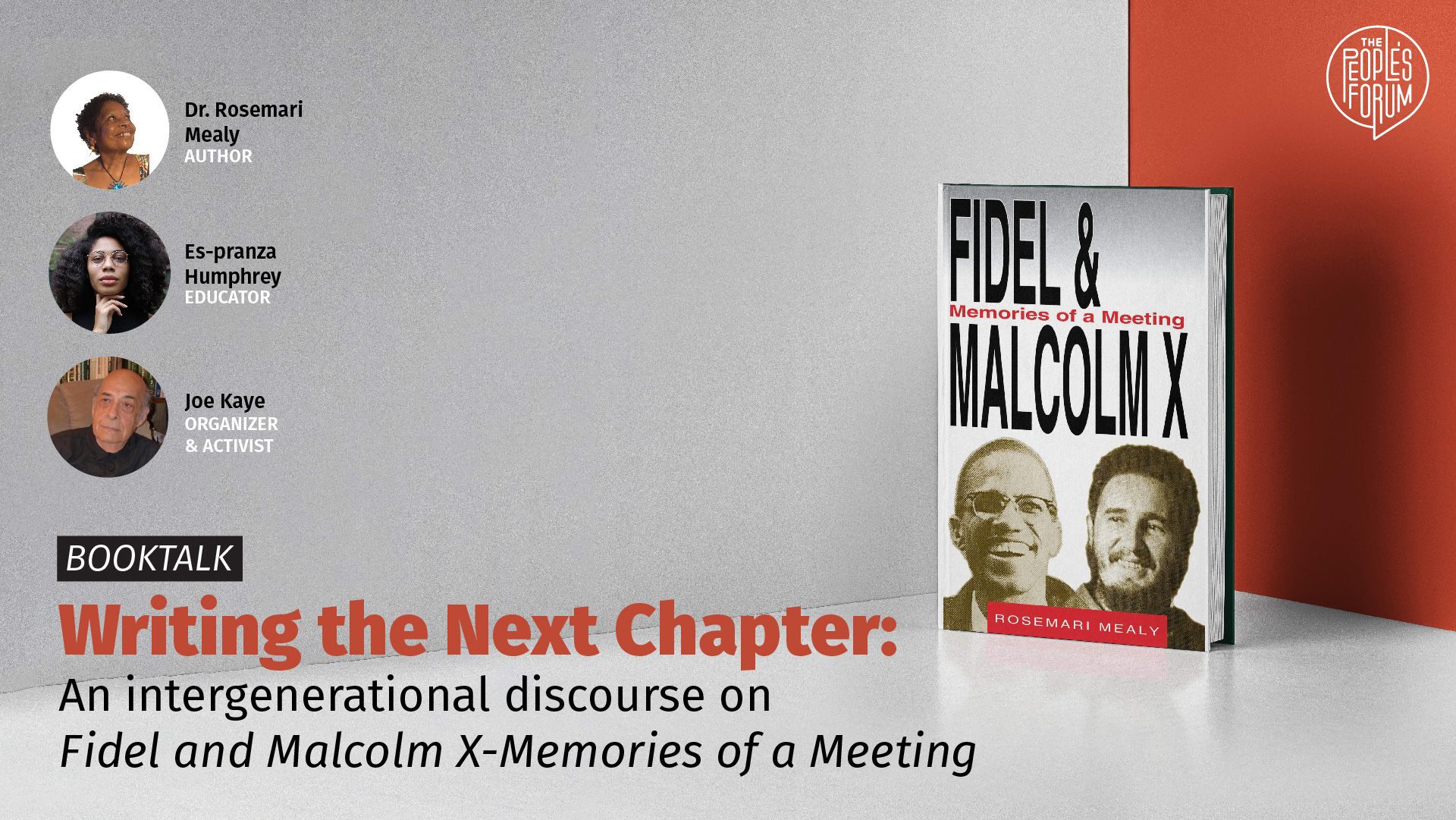 Join us for a book talk on Fidel and Malcolm X-Memories of a Meeting with author Dr. Rosemari Mealy. More than six decades have lapsed since September 1960,  when African American Muslim leader Malcolm X  welcomed Cuban President Fidel Castro to a midnight meeting at Harlem’s Black-owned Hotel Theresa. In this book, Dr. Mealy, along with contributors Elombe Brath, LeRoi Jones (Amiri Baraka),  Sarah E. Wright, and Bill Epton, compile the recollections of a number of persons who played important roles in this historic summit. They add to these their own perspectives—as historians, poets, journalists, and political activists—on the two leaders and the revolutionary movements they spawned. The combined reflections,  coupled with Malcolm’s and Fidel’s own writings about the encounter and rare photographs of the two men together,  yield an authentic accounting of a remarkable meeting of the minds.

The question of how this meeting holds relevance in today’s context and for the future of our work will be discussed in-conversation by Dr. Rosemari Mealy, Joe Kaye, and Es-pranza Humphrey.

Author: The Crime of Impunity – The Crime of Punishment. He is a veteran NY Activist and was a part of thousands of onlookers who welcomed Fidel and Cuban Delegation to Harlem.

Es-pranza Humphrey
A historian of Black studies and museum educator based out of New York. She received her BA in History from the University of New Haven and her MA in American Studies from Columbia University. Her research has incorporated interdisciplinary approaches to spotlight the Black feminine identity expressed through various forms of performance art. Her latest research endeavors focus on the history of fashion as activism for Black women. Es-pranza has extensive experience working with teens, having planned, organized, and facilitated myriad events for high school students. She also served as a mentor to and supervisor of an award-winning, year-long teen program at New-York Historical Society. She is currently the Education Coordinator at Poster House where she curated the upcoming exhibition Black Power to Black People: Branding the Black Panther Party.
Dr. Rosemari Mealy
Rosemari Mealy JD, PhD,  is  a longtime activist-scholar. Dr. Mealy is the author of Fidel and Malcolm X-Memories of A Meeting (Black Classic Press 2014). Activism and Disciplinary Suspensions/ Expulsions At Historically Black Colleges and Universities (HBCUs): A Phenomenological Study of the Black Student Sit-In Movement, 1960-1962 (Mellen Press, 2013). Other writings include a long list of articles and chapters in various publications.  She served as the NGO Rep. of the National Alliance of TW Journalist. Mealy has been the recipient of several outstanding reporting awards from the National Association of Black Journalist and a 2019 Congressional Proclamation from Congresswoman Yvette Clark of the 9th Congressional District of Brooklyn, NY.
A longtime Friend of Cuba, she lived and worked  in that country  as an internationalist journalist for Radio Habana Cuba (RHC). In 2011, Dr. Mealy was petitioned by the Cuban Institute for Friendship with the People (ICAP), where she was awarded the Friendship Medal by the Council of State of the Republic of Cuba.  She was a member of both the Philadelphia and New Haven Chapters of the Black Panther Party ( BPP).  Prof. Mealy is an adjunct assistant Professor at the City College of New York.