The Politics of Abolition 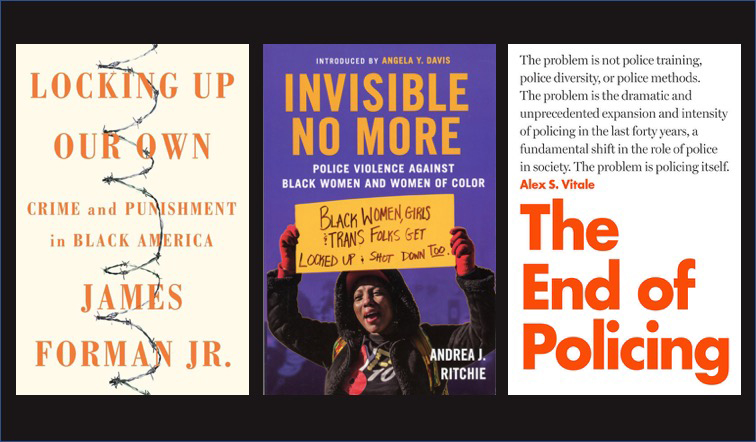 Join authors James Forman Jr., Andrea Ritchie, and Alex S. Vitale for a discussion of the political challenges facing police and prison abolitionists as well as on going campaigns around the US that seek to replace police and jails with healthier communities.

James Forman, Jr. is a leading critic of mass incarceration and its disproportionate impact on people of color. In Locking Up Our Own, he seeks to understand the war on crime that began in the 1970s and why it was supported by many African American leaders in the nation’s urban centers. Locking Up Our Own won the Pulitzer Prize for Non-Fiction and was named a Best Book of the Year by numerous publications, including the New York Times, The Marshall Project, Publisher’s Weekly, and GQ Magazine. Reviewers have called the book “superb and shattering” (New York Times), “eloquent” and “sobering” (London Review of Books), and “moving, nuanced, and candid” (New York Review of Books).

Andrea Ritchie is a Black lesbian immigrant and police misconduct attorney and organizer who has engaged in extensive research, writing, and advocacy around criminalization of women and lesbian, gay, bisexual and transgender (LGBT) people of color over the past two decades. She recently published Invisible No More: Police Violence Against Black Women and Women of Color now available from Beacon Press.  Ritchie is a nationally recognized expert and sought after commentator on policing issues. She has testified before the President’s Task Force on 21st Century Policing, the White House Council on Women and Girls, the Prison Rape Elimination Commission, and several United Nations Treaty Bodies. She has appeared regularly in the New York Times, as well as on MSNBC, C-Span, NBC Nightly News, NPR, Al-Jazeera, and Mother Jones. Her blogs and opinion pieces have been published in The New York Times, The Root, Colorlines, Rewire, Cassius Life, Portside, Praxis, Bilerico and TruthOUT.  Ritchie is currently Researcher-in-Residence on Race, Gender, Sexuality and Criminalization at the Social Justice Institute of the Barnard Center for Research on Women.

​Alex S. Vitale is Professor of Sociology and Coordinator of the Policing and Social Justice Project at Brooklyn College and a Visiting Professor at London Southbank University. He has spent the last 25 years writing about policing and consults both police departments and human rights organizations internationally. He also serves on the New York State Advisory Committee of the US Commission on Civil Rights. Prof. Vitale is the author of City of Disorder: How the Quality of Life Campaign Transformed New York Politics and The End of Policing. He is also a frequent essayist, whose writings have appeared in The NY Times, NY Daily News, The Nation, Vice News, Jacobin, and USA Today.