THE DEAD EYE AND THE DEEP BLUE SEA 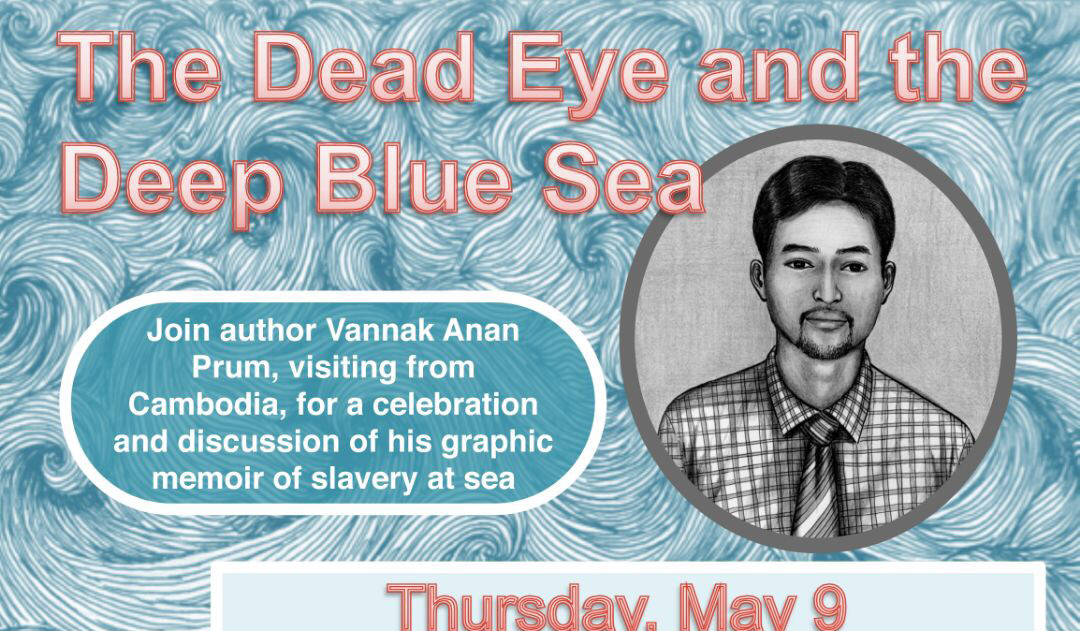 Join author Vannak Anan Prum, visiting from Cambodia, for a celebration and discussion of his graphic memoir of slavery at sea.

Too poor to pay his pregnant wife’s hospital bill, Vannak Anan Prum left his village in Cambodia to seek work in Thailand. Men who appeared to be employers on a fishing vessel promised to return him home after a few months at sea, but instead Vannak was hostaged on the vessel for four years of hard labor. Amid violence and cruelty, including frequent beheadings, Vannak survived in large part by honing his ability to tattoo his shipmates–a skill he possessed despite never having been trained in art or having had access to art supplies while growing up.

As a means of escape, Vannak and a friend jumped into the water and, hugging empty fish-sauce containers because they could not swim, reached Malaysia in the dark of night. At the harbor, they were taken into a police station . . . then sold by their rescuers to work on a plantation. Vannak was kept as a laborer for over a year before an NGO could secure his return to Cambodia. After five years away, Vannak was finally reunited with his family.

Vannak documented his ordeal in raw, colorful, detailed illustrations, first created because he believed that without them no one would believe his story. Indeed, very little is known about what happens to the men and boys who end up working on fishing boats in Asia, and these images are some of the first records. In regional Cambodia, many families still wait for men who have disappeared across the Thai border, and out to sea. The Dead Eye and the Deep Blue Sea is a testament to the lives of these many fishermen who are trapped on boats in the Indian Ocean.