SOLIDARITY WITH THE PEOPLE OF HAITI IN THEIR STRUGGLE FOR DEMOCRACY, JUSTICE, AND REPARATIONS 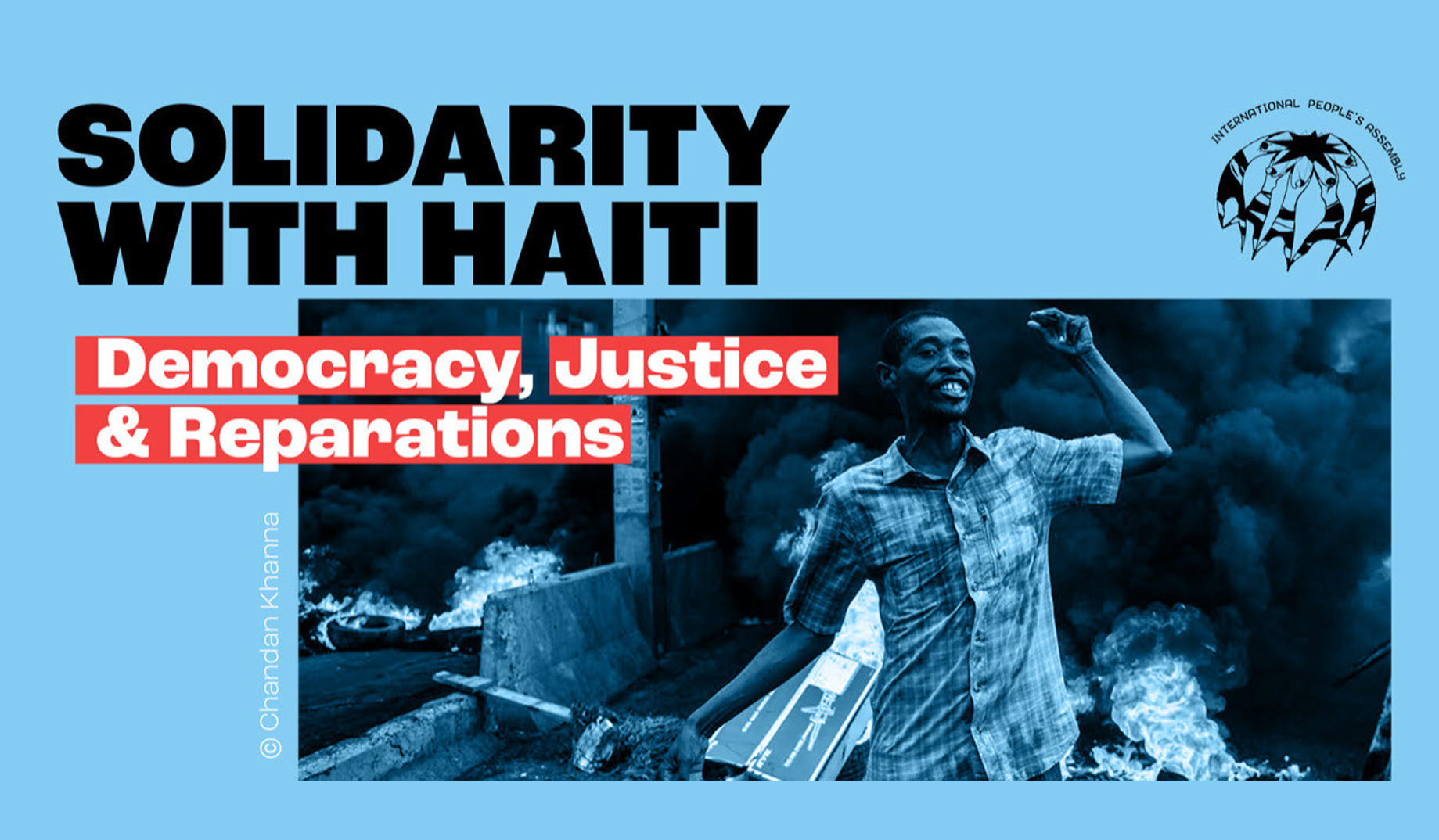 SOLIDARITY WITH THE PEOPLE OF HAITI IN THEIR STRUGGLE FOR DEMOCRACY, JUSTICE, AND REPARATIONS

PLEASE SIGN THIS DECLARATION SENDING THE NAME OF YOUR ORGANIZATION TO chalmerscamille6@gmail.com

Haiti is once again going through a profound crisis. Central to this is the struggle against the dictatorship imposed by former president Jovenel Moïse. Since last year Mr. Moise, after decreeing the dismissal of Parliament, has been ruling through decrees, permanently violating Haiti’s constitution. He has refused to leave power after his mandate ended on February 7, 2021, claiming that it ends on February 7 of next year, without any legal basis. This disregard of the constitution is taking place despite multiple statements by the country’s main judicial bodies, such as the CSPJ (Superior Council of Judicial Power) and the Association of Haitian Lawyers. Numerous religious groups and numerous institutions that are representative of society have also spoken. At this time, there is a strike by the judiciary, which leaves the country without any public body of political power.

At the same time, this institutional crisis is framed in the insecurity that affects practically all sectors of Haitian society. An insecurity expressed through savage repressions of popular mobilizations by the PNH (Haitian National Police), which at the service of the executive power. They have attacked journalists and committed various massacres in poor neighborhoods. Throughout the country, there have been assassinations and arbitrary arrests of opponents. Most recently, a judge of the High Court was detained under the pretext of promoting an alleged plot against the security of the State and to assassinate the president leading to the illegal and arbitrary revocation of three judges of this Court. This last period has also seen the creation of hundreds of armed groups that spread terror over the entire country and that respond to power, transforming kidnapping into a fairly prosperous industry for these criminals.

The 13 years of military occupation by United Nations troops through MINUSTAH and the operations of prolongation of guardianship through MINUJUSTH and BINUH have aggravated the Haitian crisis. They supported retrograde and undemocratic sectors who, along with gangsters, committed serious crimes against the Haitian people and their fundamental rights. For this, the people of Haiti deserve a process of justice and reparations. They have paid dearly for the intervention of MINUSTAH: 30 THOUSAND DEAD from cholera transmitted by the soldiers, thousands of women raped, who now raise orphaned children. Nothing has changed in 13 years, more social inequality, poverty, more difficulties for the people. The absence of democracy stays the same.

The poor’s living conditions have worsened dramatically as a result of more than 30 years of neoliberal policies imposed by the International Financial Institutions (IFIs), a severe exchange rate crisis, the freezing of the minimum wage, and inflation above 20% during the last three years.

It should be emphasized that, despite this dramatic situation, the Haitian people remain firm and are constantly mobilizing to prevent the consolidation of a dictatorship by demanding the immediate leave of office by former President Jovenel Moïse.

Taking into account the importance of this struggle and that this dictatorial regime still has the support of imperialist governments such as the United States of America, Canada, France, and international organizations such as the UN, the OAS, and the EU, the IPA calls its members to contribute their full and active solidarity to the struggle of the Haitian people, and to sign this Petition that demands the end of the dictatorship as well as respect for the sovereignty and self-determination of the Haitian people, the establishment of a transition government led by Haitians to launch a process of authentic national reconstruction.

In addition to expressing our solidarity with the Haitian people’s resistance, we call for our organizations to demonstrate in front of the embassies of the imperialist countries and before the United Nations.

Only the Haitian people can decide their future. Down with Moise and yes to a people’s transition government, until a constituent is democratically elected.

International Secretariat of the IPA