Mohawk Nation: Then, Now, the Future 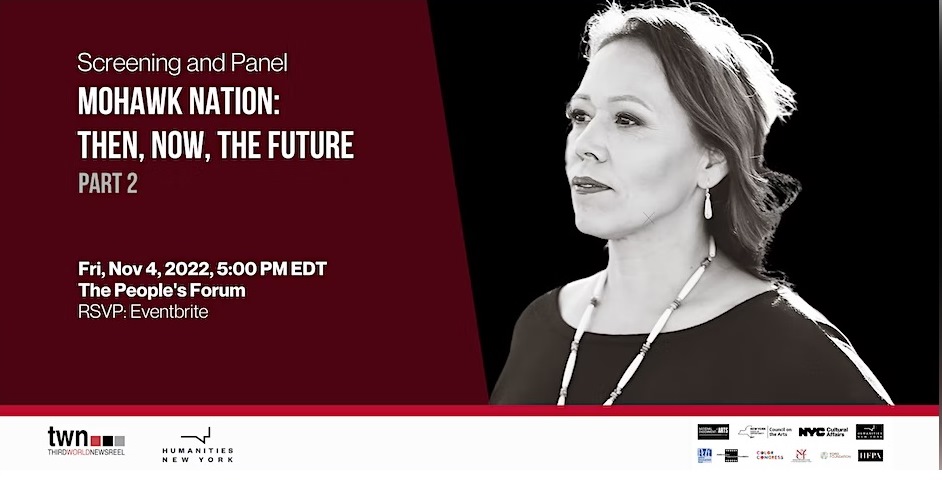 Register HERE!
Films and speakers on the Mohawk people, land and struggle. Second of 2 programs.
This event, one of two from Third World Newsreel, are conceived as windows into the histories of indigenous people and windows that open onto the possibilities for the future.
Ganienkeh is the independent land of the Mohawk people in upstate New York, whose sovereignty was re-established in 1974. Planned in collaboration with the Ganienkeh, this and an October program upstate near Ganienkeh land, focus on indigenous activism and current challenges to survival. This includes discussions of the process of cultural solidarity and creating innovative media practices.
This program, organized by Professor Annie Rochon (Kanehsatake) of Paul Smith’s College, Ku-Ling Yurman, Allan Siegel, Roselly Torres and Third World Newsreel, will feature a rarely seen film: MOHAWK NATION (Allan Siegel with Third World Newsreel and the Ganienkeh, 1978), clips from YOU ARE ON INDIAN LAND (Michael Kanentakeron Mitchel, 1969) and the recent film WITHOUT A WHISPER (Katsitsionni Fox, 2020) with speakers including filmmakers Katsitsionni Fox, Allan Siegel and Prof Annie Rochon, members of the Ganienkeh and others.
A hybrid program, most speakers will be in person, but some will be on zoom.
A reception will be held at 5 pm, followed by the program at 6 PM.
A similar program was held October 13th in Paul Smith, NY.
This program has been made possible in part with an Action Grant from Humanities New York.
Questions to workshop@twn.org.
Katsitsionni Fox has been making films since 2003 in the Mohawk Territory of Akwesasne, where she resides. Her film “Ohero:kon – Under the Husk,” following the journey of two Mohawk girls as they take part in their traditional passage rites to becoming Mohawk Women, received funding from Vision Maker Media and was broadcast on many PBS stations. Katsitsionni received the Jane Glassco Award for Emerging Filmmaker at the imagineNATIVE Film Festival in 2016 as well as the Achievement in Documentary Filmmaking Award at LA Skins Fest in 2016. She produced a series of twelve short segments for REMATRIATION, a Native American women’s online, multi-media magazine, that is focused on healing and empowerment of Native women through the sharing of their stories and successes. Her latest documentary, WITHOUT A WHISPER, is an untold story of how Native American women helped to inspire the struggle of American women’s suffrage movement in the United States.
Register HERE!