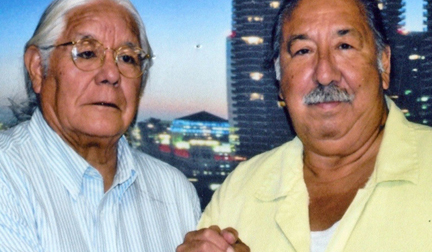 Lenny Foster of the Diné Nation is the former Director of the Navajo Nation Corrections Project and the Spiritual Advisor for more than 2,000 Native American inmates in ninety-six state and federal prisons in the Western U.S. He has co-authored legislation in New Mexico, Arizona, Utah and Colorado allowing Native American spiritual and religious practice in prison and resulting in significant reductions in prison returns. He is a board member of the International Indian Treaty Council, a sun dancer and member of the Native American Church. He has been with the American Indian Movement since 1969 and has participated in actions including Alcatraz, Black Mesa, the Trail of Broken Treaties, Wounded Knee 1973, the Menominee Monastery Occupation, Shiprock Fairchild Occupation, the Longest Walk and the Big Mountain land struggle. Lenny Foster has received many accolades and honors for his groundbreaking work with Indigenous prisoners’ human rights and has testified many times at the United Nations on both Indigenous issues and Political Prisoner Leonard Peltier.

Leonard Peltier is a Native American activist who was unfairly and illegally tried and convicted for his participation in a firefight on the Pine Ridge Reservation in 1975. This event took place amid the high tensions and extreme violence known as the “Reign of Terror” and left one Native American and two FBI agents dead. After a trial the following year, in which two other firefight participants were acquitted on the grounds of self-defense, the FBI went to extraordinary lengths to get Leonard Peltier—someone had to pay. Leonard Peltier was illegally extradited from Canada to face a trial filled with Constitutional violations. Since his sentencing, documents proving FBI misconduct that included the fabrication and suppression of evidence, have been revealed. During subsequent oral arguments, the US Prosecutor admitted “… we can’t prove who shot those agents.” Leonard Peltier remains in prison after being denied Executive Clemency by President Obama.

****Light Refreshments Will Be Served
****Other Speakers and Culture TBA