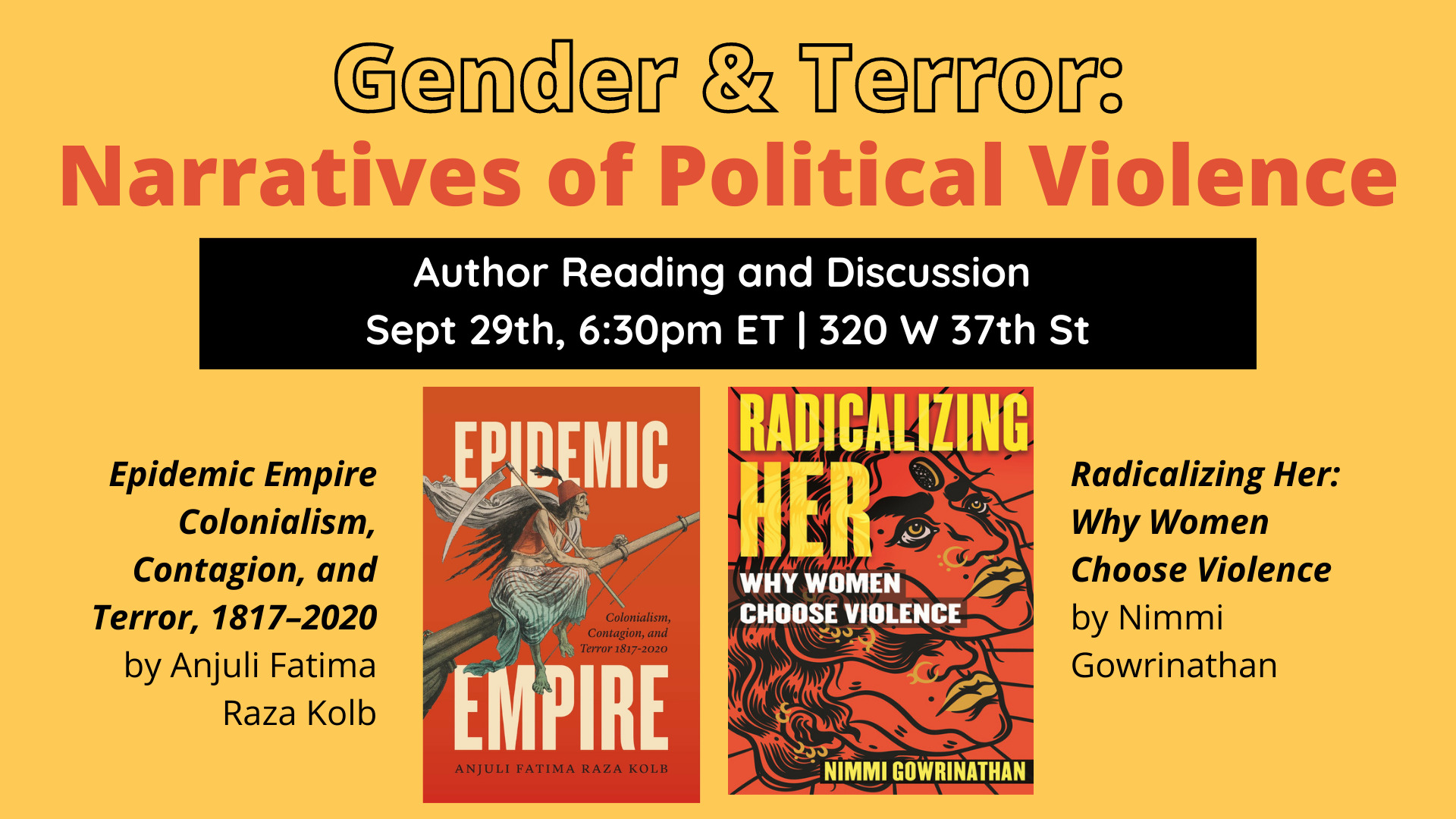 Please join us for an in-person reading and discussion with long-time collaborators and authors NIMMI GOWRINATHAN (Radicalizing Her, Beacon 2021) and ANJULI RAZA KOLB (Epidemic Empire, U Chicago Press 2021). Books will be available for purchase in-person from 1804 Books. The event will end with a book-signing!

Both authors will read short excerpts from their recent books and engage each other on overlapping questions on feminism and its discontents and the meaning of political violence. With case studies ranging from female fighters in Sri Lanka to rebellion in Algeria, Nimmi and Anjuli will grapple with the de-politicizing legacies of imperialism and the de-humanizing narratives of insurgency that have shaped contemporary crises: from the global pandemic to the U.S. withdrawal from Afghanistan.

Epidemic Empire Colonialism, Contagion, and Terror by Anjuli Fatima Raza Kolb
Terrorism is a cancer, an infection, an epidemic, a plague. For more than a century, this metaphor has figured insurgent violence as contagion in order to contain its political energies. In Epidemic Empire, Anjuli Fatima Raza Kolb shows that this trope began in responses to the Indian Mutiny of 1857 and tracks its tenacious hold through 9/11 and beyond. The result is the first book-length study to approach the global War on Terror from a postcolonial literary perspective. Raza Kolb assembles a diverse archive from colonial India, imperial Britain, French and independent Algeria, the postcolonial Islamic diaspora, and the neoimperial United States. Anchoring her book are studies of four major writers in the colonial-postcolonial canon: Rudyard Kipling, Bram Stoker, Albert Camus, and Salman Rushdie. Across these sources, she reveals the tendency to imagine anticolonial rebellion, and Muslim insurgency specifically, as a virulent form of social contagion. Exposing the long history of this broken but persistent narrative, Epidemic Empire is a major contribution to the rhetorical history of our present moment

Radicalizing Her: Why Women Choose Violence by Nimmi Gowrinathan asks what those with power in the West typically don’t see — and the questions they don’t ask when they see women militants. Though the female fighter is often seen as an anomaly, women make up nearly 30% of militant movements worldwide. Historically, these women—viewed as victims, weak-willed wives, and prey to Stockholm Syndrome—have been deeply misunderstood. Radicalizing Her holds the female fighter up in all her complexity as a kind of mirror to contemporary conversations on gender, violence, and power. With narratives anchored in battlefields in the Global South, Gowrinathan offers critical insights at a moment that demands an urgent re-imagining of the possibilities for women’s resistance in the West. Whether challenging the limits of relying on trauma for political action against sexual violence, exploring a rise in gun ownership amongst
Black women, or exposing the white feminist ideals driving foreign policy “reading Gowrinathan is a rare treat: when she narrates a story, she is as gripping and lyrical as Arundhati Roy – when she presents her philosophical takeaways on violence, she is precise and innovative, the Hannah Arendt of our times” (Meena Kandasamy, Author of When I Hit You). In a starred review from Kirkus Reviews, this book has been described as “a captivating, essential perspective on a neglected conversation”.