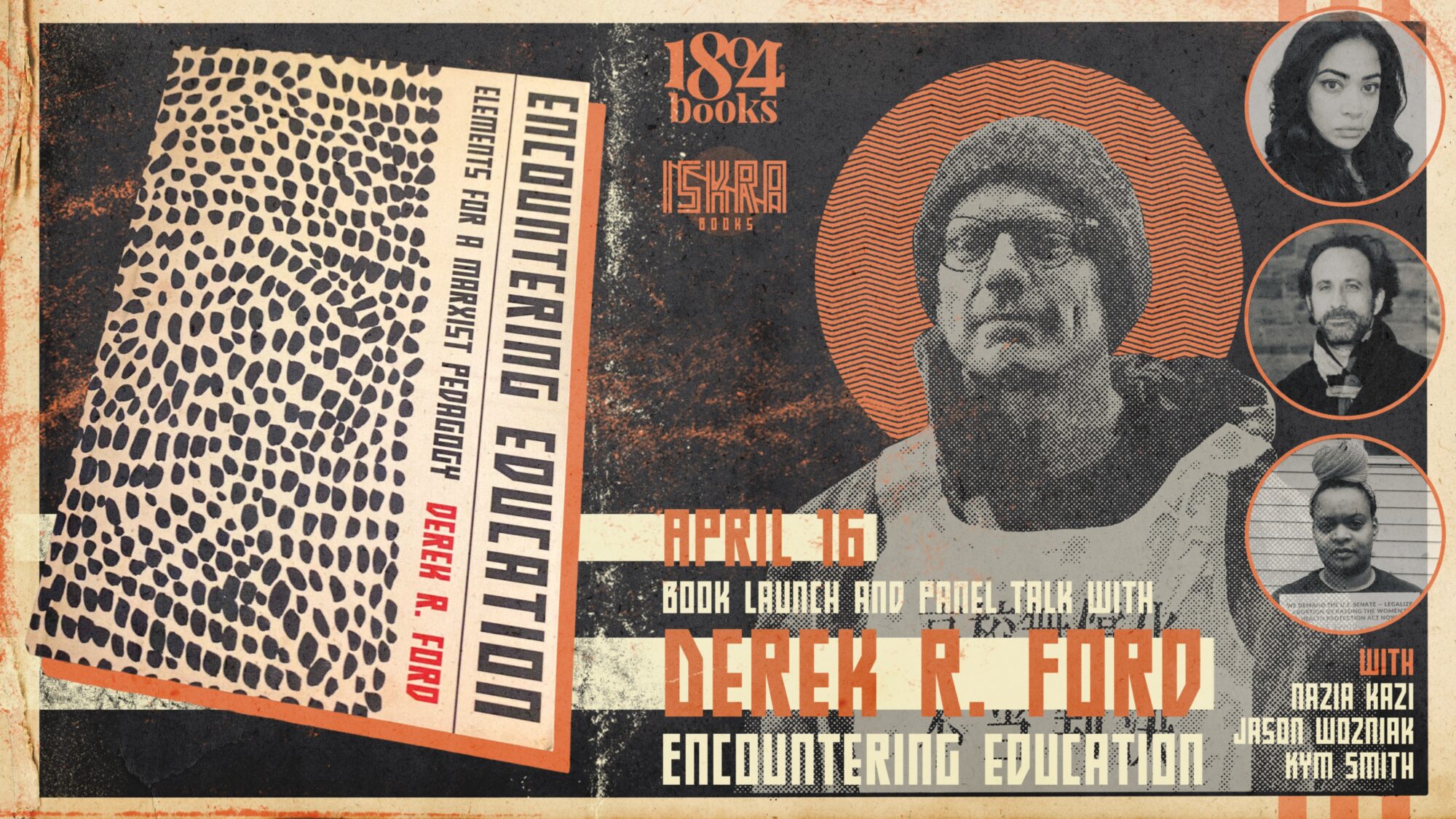 Join us for an online event on Encountering Education: Elements for a Marxist Pedagogy with author Derek R. Ford. In Encountering Education, Ford develops new marxist pedagogical elements to advance the class struggle. Ford argues that the entire marxist project of establishing the dictatorship of the proletariat and creating a classless society entails an educational praxis that builds up disinterpellative encounters. Through an inventive reading of Marx, Althusser, Glissant, and others, they advance two dialectical pedagogical processes of inquiry and presentation, developing both-and the political relations between the two-through a range of theorists and situations. Encountering Education both illuminates the historical, political, spatial, technological, and sonic conditions of our struggle and assembles new pedagogical forms of reading, writing, listening, and learning through which we can encounter and realize an alternative social formation and, through the guidance of the Party, a new mode of production. Derek will be joined in conversation with Nazia Kazi, Jason Wozniak, and Kym Smith.
SPEAKERS:

Derek R. Ford is assistant professor of education studies at DePauw University and an instructor with the People’s Forum. They’ve published eight monographs, the latest of which are Marxism, Pedagogy, and the General Intellect: Beyond the Knowledge Economy (2021) and Inhuman Educations: Jean-Francois Lyotard, Pedagogy, Thought (2021). In addition to running three book series, Ford is associate editor of Postdigital Science and Education and deputy editor of the Journal for Critical Education Policy Studies. Ford’s an organizer with the ANSWER Coalition, a member of the Party for Socialism and Liberation, and the education chair at the Hampton Institute and the editor of Liberation School. Their popular writing has appeared in Monthly Review, Black Agenda Report, and elsewhere. He also hosted the podcast series, Reading Capital with Comrades.

Nazia Kazi is an anthropologist and educator based in Philadelphia. Her work explores the role of Islamophobia and racism in the context of global politics. She has lived in Dubai, New York City, and the Chicagoland area. She is Associate Professor of Anthropology at Stockton University in New Jersey, where she teaches courses on race, ethnicity, immigration, and Islam in the U.S. She is the author of Islamophobia, Race, and Global Politics, out now in an expanded second edition from Rowman & Littlefield.

Jason Wozniak is assistant professor of educational foundations and policy studies at West Chetser University of Pennsylvania. Jason has published widely in both North and South America. He is completing his first book, provisionally titled, The Mis-Education of the Indebted Student. In addition, Jason is the founder and Co-Director of The Latin American Philosophy of Education Society (LAPES.org). For the past two years, Jason has been one of the lead researchers on Hacer Escuela/Inventing School: Rethinking the Pedagogy of Critical Theory, a sub-project of the Andrew W. Mellon Foundation Grant: Critical Theory in the Global South.

Kym Smith is an organizer with Party for Socialism and Liberation, outside liaison with Jailhouse Lawyers Speak SC and co-founder of the Soda City Bail Fund. She’s also a mom to an amazing kid, needy pitbull and self absorbed cat. You can learn more about Kym on episode 6 of “From Struggle to Militant: A Revolutionary Story” by Breaking the Chains magazine.