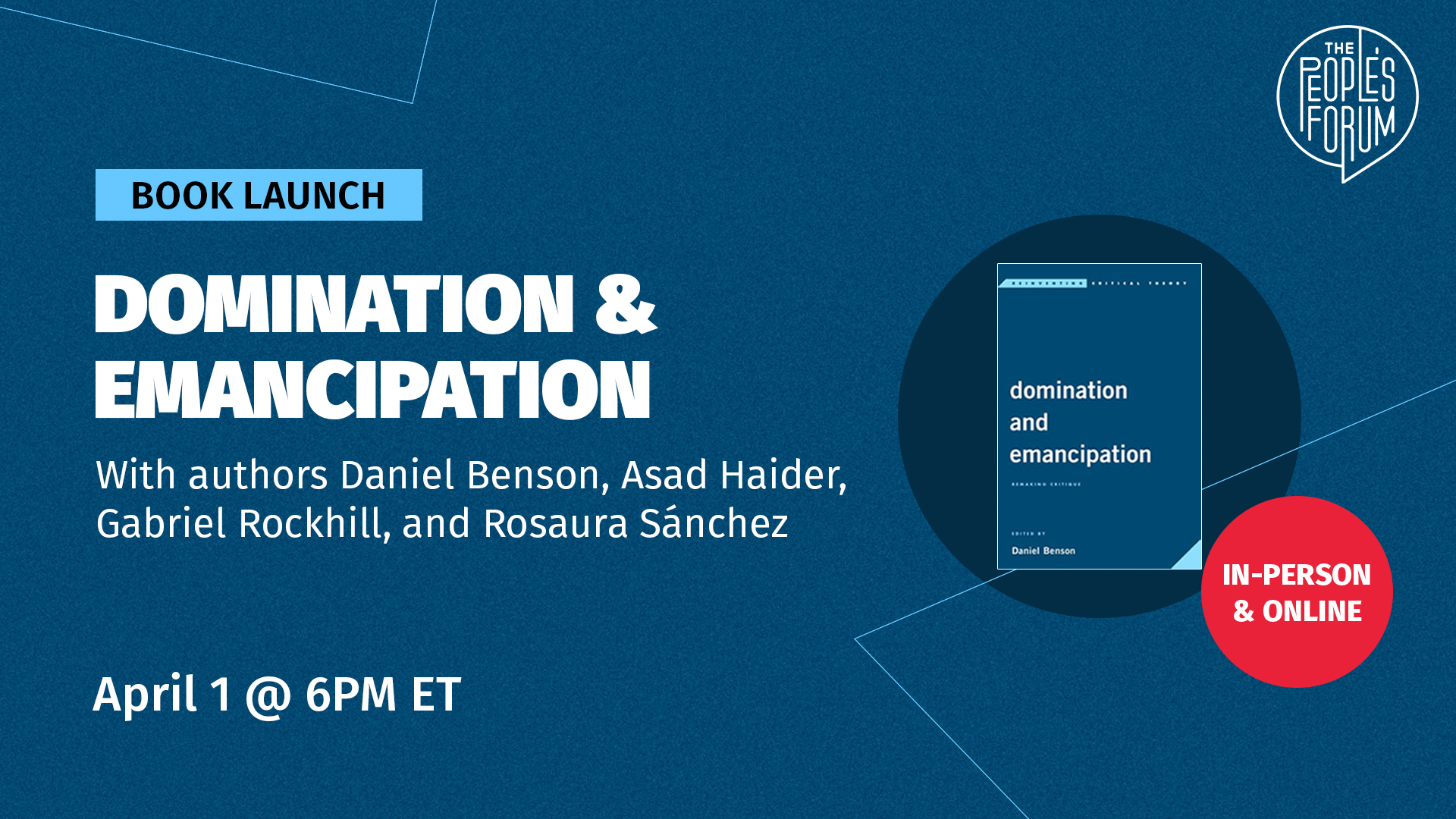 Please join us for an authors’ panel and reception to celebrate the publication of Domination and Emancipation: Remaking Critique, edited by Daniel Benson (Rowman and Littlefield, 2021). In seeking to rebuild the emancipatory potential of critique, this edited volume features recent theoretical work that can contribute to the struggles and aspirations of our moment. Daniel Benson, Asad Haider, Gabriel Rockhill, and Rosaura Sánchez will discuss their contributions to the volume and what they consider to be the most urgent issues facing Left critique today. The panel will be moderated by Antonio Vázquez-Arroyo and will include time for conversation with attendees.

Daniel Benson is an Assistant Professor of Foreign Languages and International Cultural Studies at St. Francis College. His writing has appeared in journals including Diacritics, Critical Review of Contemporary French Fixxion, and Left History.

Asad Haider is a founding editor of Viewpoint Magazine, author of Mistaken Identity: Race and Class in the Age of Trump (Verso, 2018), and co-editor of Black Radical Tradition: A Reader (Verso, forthcoming). His writing can be found in The Baffler, n+1, The Point, Salon, and elsewhere.

Gabriel Rockhill is the founding director of the Critical Theory Workshop/ Atelier de Théorie Critique, Professor of Philosophy at Villanova University, and an anti-capitalist activist. Recent books include Contre-histoire du temps présent (CNRS, 2017), Interventions in Contemporary Thought (Edinburgh UP, 2016) and Radical History and the Politics of Art (Columbia UP, 2014).

Rosaura Sánchez is an emeritus professor of Latin American Literature and Chicano Literature at the University of California, San Diego. Recent books include Spatial and Discursive Violence (Duke University Press, 2021) and the novel Keep Me Posted (2020), both of which are co-authored with Beatrice Pita.

Antonio Y. Vázquez-Arroyo is an Associate Professor of Political Science at Rutgers University-Newark. He is the author of Political Responsibility: Responding to Predicaments of Power (Columbia University Press, 2016) and is currently finishing two books: a book on the dialectical legacy to defend an earthly conception of critical theory, tentatively titled Wayward Dialectics; and a book on transatlantic political thought that brings this legacy to bear on conceptual and historical conundrums around colonialism, enlightenment and universal history.

This event will be in person at The People’s Forum and streamed on our YouTube channel.

The publisher Rowman and Littlefield will be selling the books in person and online. There is a special 30% discount, which you could access here.