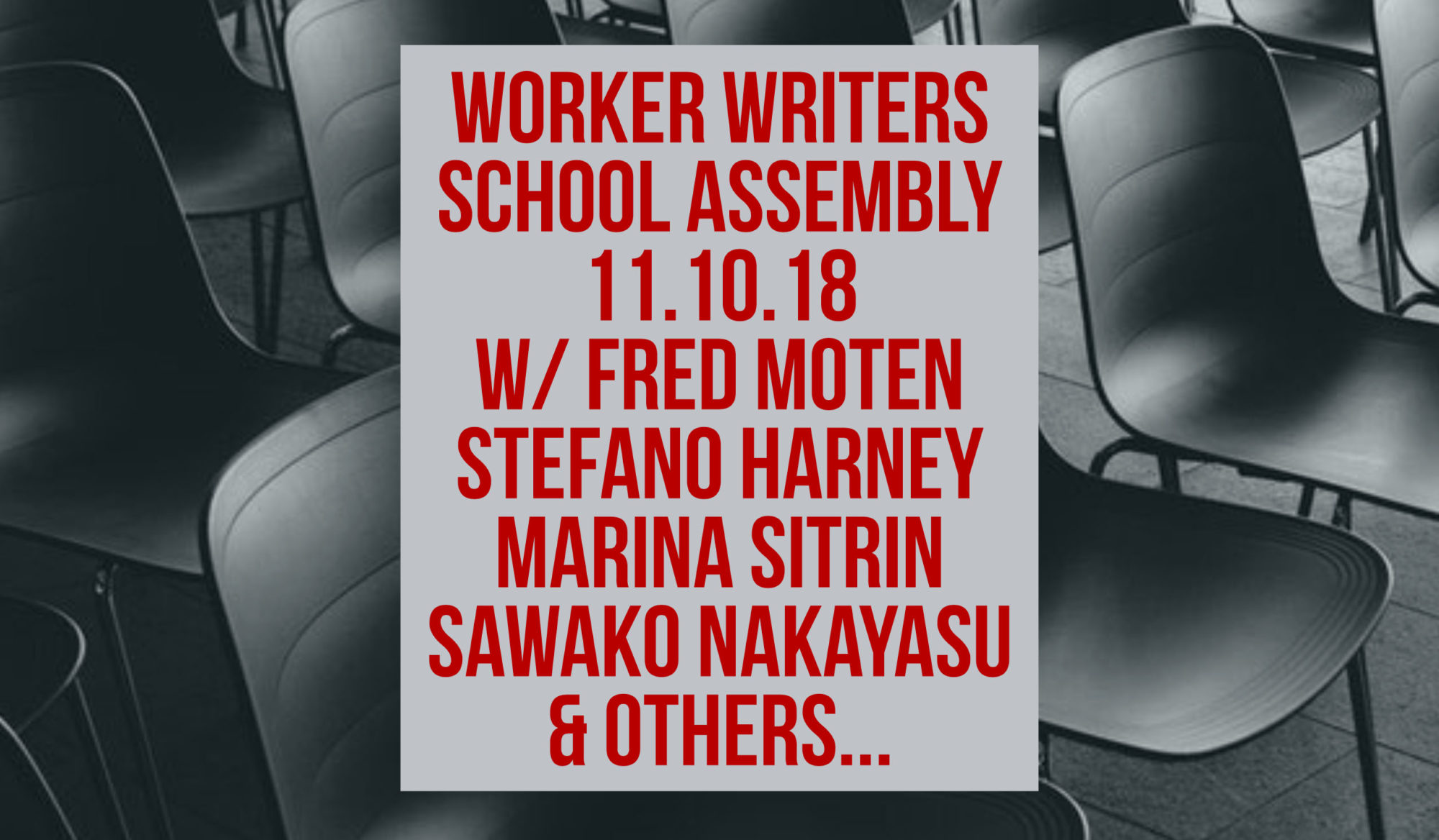 The Worker Writers School, in collaboration with the People’s Forum and PEN America, hosts our “Worker Writers School Assembly.” Join participants from Domestic Workers United, the New York Taxi Workers Alliance, Street Vendor Project, Picture the Homeless, Retail Action Project, and other organizations in a series of panels, workshops, and public conversations with a wide array of writers, activists, and scholars including Fred Moten, Stefano Harney, Marina Sitrin, Sawako Nakayasu, and others.

Ammiel Alcalay is a poet, translator, critic, and scholar who teaches at Queen’s College and the CUNY Graduate Center. He is the author and translator of, among other books, Islanders, Memories of Our Future: Selected Essays, Nine Alexandrias by Semezdin Mehmedinovic, and Outcast by Shimon Ballas, all from City Lights Books. Alcalay launched Lost & Found: The CUNY Poetics Document Initiative, an acclaimed publishing venture whose mission is to retrieve and make available key text falling widely under the rubric of the New American Poetry.

Adam Fitzgerald is the author of the poetry collections The Late Parade (2013) and George Washington (2016). He teaches at Rutgers University and is a contributing editor for Literary Hub where he regular features and interviews contemporary poets.

Adam Reich is an associate professor of sociology at Columbia University. He is the co-author, most recently, of Working for Respect: Community and Conflict at WalMart (Columbia University Press, 2018). His previous books include Hidden Truth: The Young Men Navigating Lives in and out of Juvenile Prison (2010), With God on Our Side: The Struggle for Workers’ Rights in a Catholic Hospital (2012), and Selling Our Souls: The Commodification of Hospital Care in the United States (2014).

Camille Rankine is the daughter of Jamaican immigrants. Her first full-length poetry collection, Incorrect Merciful Impulses, was published in 2016 by Copper Canyon Press. Her chapbook Slow Dance with Trip Wire, was selected by Cornelius Eady for the Poetry Society of America’s 2010 New York Chapbook Fellowship. A graduate of Harvard University and Columbia University’s School of the Arts, she serves on the Executive Committee of VIDA: Women in Literary Arts, chairs the Board of Trustees of The Poetry Project, and co-chairs the Brooklyn Book Festival Poetry Committee. She is a visiting professor at The New School and lives in New York City.

Carolina Bank Muñoz is a Professor of Sociology at Brooklyn College. Her books include Transnational Tortillas: Race, Gender, and Shop Floor Politics in Mexico and the United States (Cornell, 2008) and Building Power from Below: Chilean Workers Take on Walmart (Cornell, 2017). With Bridget Kenny and Antonoio Stecher, she edited WalMart in the Global South: Workplace Culture, Labor Politics, and Supply Chains, just out from the University of Texas Press.

David Stovall is the author of Born Out of Struggle: Critical Race Theory, School Creation, and the Politics of Interruption (SUNY Press, 2016). He is Professor of Educational Policy Studies and African American Studies at the University of Illinois at Chicago and co-editor (with William Ayers and Therese Quinn) of Handbook of Social Justice Education.

Fred Moten & Stefano Harney have been friends for thirty-five years and have been writing together for twenty. They are authors of The Undercommons: Fugitive Planning and Black Study, A Poetics of the Undercommons and the forthcoming All Incomplete.

Jennifer Osula is a member of the Worker Writers School and an organizer at the Retail Action Project. She has recently performed her poems at the PEN World Voices Festival, Berl’s Poetry Bookshop, and elsewhere across NYC.

Marina Sitrin is Assistant Professor of Sociology at Binghamton University. Her recent and forthcoming books include The New Revolutions: From Social Movements to Societies in Movement (University of California Press, forthcoming), They Can’t Represent Us! Reinventing Democracy from Greece to Occupy, co-authored with Dario Azzellini (Verso Press, 2014), Everyday Revolutions: Horizontalism and Autonomy in Argentina, (Zed Books, 2012), Occupying Language: The Secret Rendezvous with History and the Present, co-authored with Dario Azzellini (New York Zuccotti Park Press, 2012), and Horizontalism: Voices of Popular Power in Argentina (AK Press, 2006).

Peter Ikeler is the author of Hard Sell: Work and Resistance in Retail Chains (Cornell University Press, 2016) and Assistant Professor of Sociology at the State University of New York, College at Old Westbury. His research centers on post-industrial labor processes and movements, as well as contemporary class structure and consciousness in advanced capitalist countries.

Sawako Nakayasu is a transnational poet, and translator. She is an Assistant Professor at Brown University. Her books include The Ants (Les Figues Press, 2014), Texture Notes (Letter Machine Editions, 2010), and the translation of The Collected Poems of Chika Sagawa (Canarium Books, 2015), as well as unconventional translations such as Costume en Face( Ugly Duckling Presse, 2015), a handwritten notebook of Tatsumi Hijikata’s dance notations, and Mouth: Eats Color – Sagawa Chika Translations, Anti-translations, & Originals (Rogue Factorial, 2011), a multilingual work of both original and translated poetry.

Timothy Liu is the author of ten books of poems, including Of Thee I Sing, selected by Publishers Weekly as a 2004 Book-of-the-Year; Say Goodnight, a 1998 PEN Open Book Margins Award; and Vox Angelica, which won the 1992 Poetry Society of America’s Norma Farber First Book Award, and, most recently, Don’t Go Back to Sleep. He has also edited Word of Mouth: An Anthology of Gay American Poetry. Liu is currently a Professor of English at William Paterson University in New Jersey.

Vanessa Jimenez Gabb is the author of Images for Radical Politics, which was the Editor’s Choice in the 2015 Rescue Press Black Box Poetry Prize contest; and the chapbooks midnight blue (Porkbelly Press, 2015) and Weekend Poems (dancing girl press, 2014). She received her MFA in Creative Writing from CUNY Brooklyn College, where she was the recipient of the 2010 Himan Brown Award in Poetry. Currently, she teaches at Newark Academy.

Zaina Alsous is the daughter of the Palestinian diaspora. She was recently announced as the winner of the Etel Adnan Poetry Prize for her collection A Theory of Birds, to be published in 2019 by the University of Arkansas Press. Currently, she is a grad student worker and organizing member of the abolitionist organization The Dream Defenders in Florida.