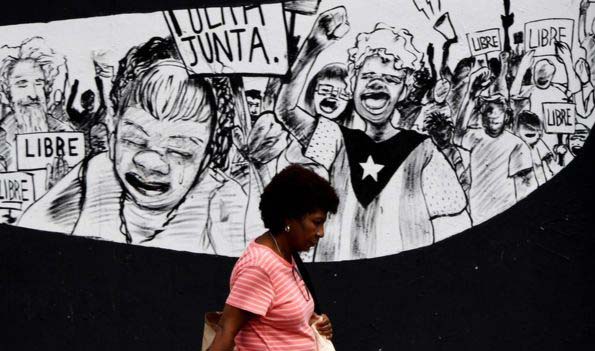 Repression and Resistance in the Colony!

In 2016, the Yankee U.S. Congress passed The Puerto Rico Oversight, Management, and Economic Stability Act (PROMESA) into law, tightening its economic, political, judicial and military dictatorship over its’ colony, Puerto Rico.  This Junta is spearheading the imposition of yet another austerity plan.

The people of Puerto Rico responded by shutting down the first meeting of the Yankee Fiscal Control Board in San Juan and growing protest and resistance to this second invasion of their homeland.

On November 3rd, join us in meeting the face of the resistance and welcoming them to New York.  A delegation from Se Acabaron Las Promesas – a growing militant and radical movement on the Island which has led the struggles in the streets of Puerto Rico against the colonial forces and Wall Street kingpins represented by Fiscal Management Board.

Rogelio Maldonado Rivera, Scott F. Barbes Caminero and Isamar Anzalotta will be speaking to the U.S. crimes against Puerto Rico, and the movement for independence.