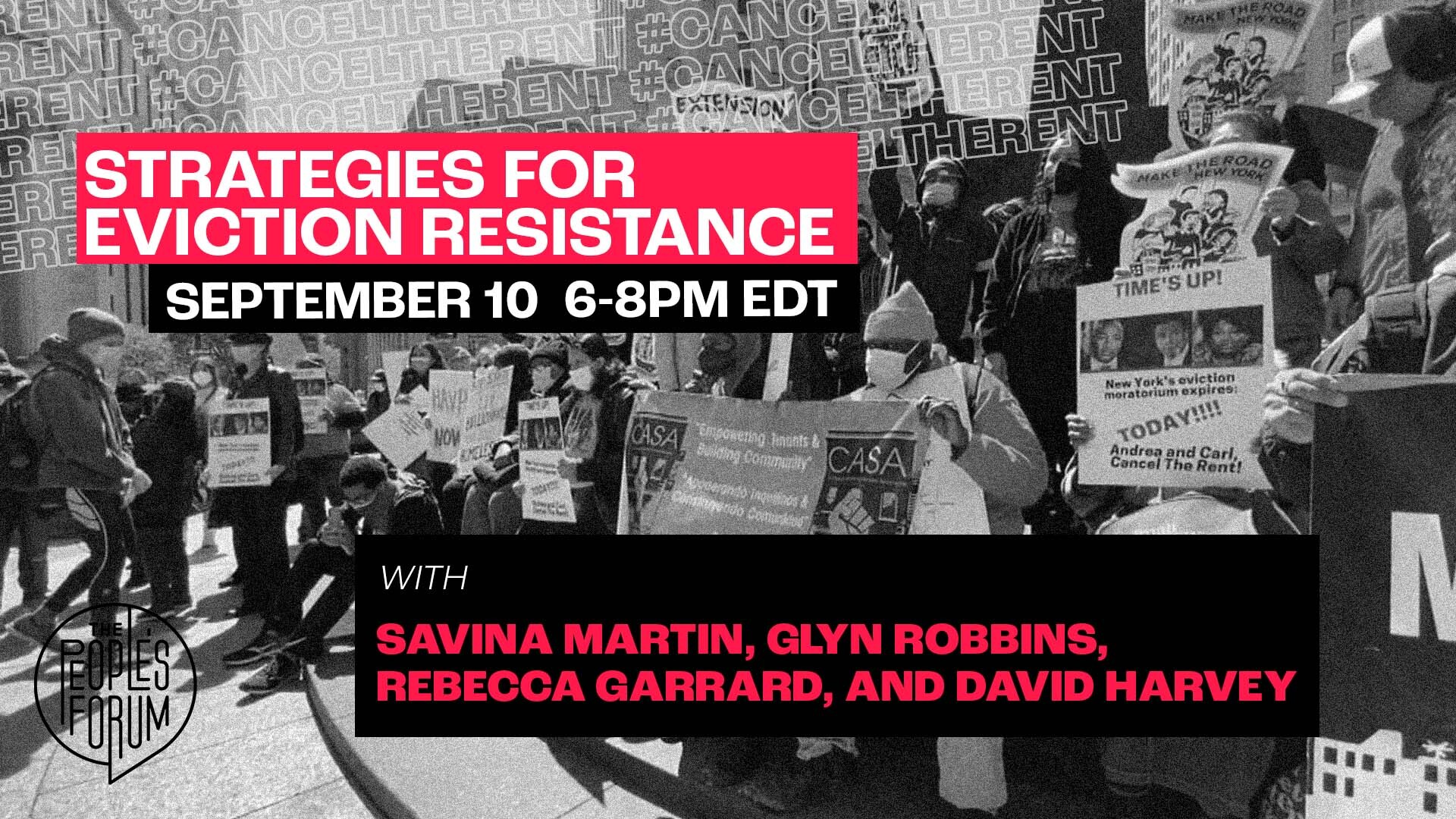 This event will be in person at the People’s Forum and live streamed on our YouTube.

COVID-19 and the consequences of contemporary capitalism has deeply exacerbated the already existing housing crisis in the United States. Researchers say renters in the US owe landlords a collective $20 billion after months of economic instability and disruption caused by COVID. And despite the eviction moratorium, tenants were not protected from their landlords and more than 455,000 evictions occurred across just six states during the pandemic.

Now, as of Aug 26, 2021, the Supreme Court has blocked the Biden administration’s extension of the eviction moratorium. With no rent cancellations in sight, we all sense the horrible scale of the looming eviction crisis.

Join organizers, scholars, and educators from the US and UK, David Harvey, Rebecca Garrard, Savina Martin, and Glyn Robbins as they discuss “Strategies for Eviction Resistance.”

Savina Martin raised in Roxbury, Massachusetts, is an Army Veteran, and over the years has mobilized and organized around the war on drugs affecting homeless men, women and veterans in Boston and San Diego, CA. In 1993, she helped to coordinate resources to refurbish an abandoned “Takeover” home, which today continues to provide refuge for homeless women recovering from addiction. She is currently a member of the Clergy and Veterans Council of the National Union of the Homeless and TriChair of the Massachusetts Poor People Campaign. In 2019 she graduated from Our Lady of the Elms College, MA., with an Honorary Doctorate Degree in Humane Letters. Serves as Trichair Chair of the Massachusetts Poor People Campaign: A National Call for Moral Revival.
/span>

Rebecca Garrard is the current Legislative Director of Citizen Action of New York and previously served as the Campaign Manager for Housing Justice for the organization. She is also a member of the Coordinate Committee of the New York State Poor People’s Campaign, and serves on their Basebuilding and Campaigns Committee as well. Rebecca is a member of the coordinating team of the Upstate/Downstate Housing Alliance/Housing Justice for All Coalition. Rebecca started her career as a labor leader in Dutchess County. There, she organized for racial justice within schools and access to community resources in impoverished communities.