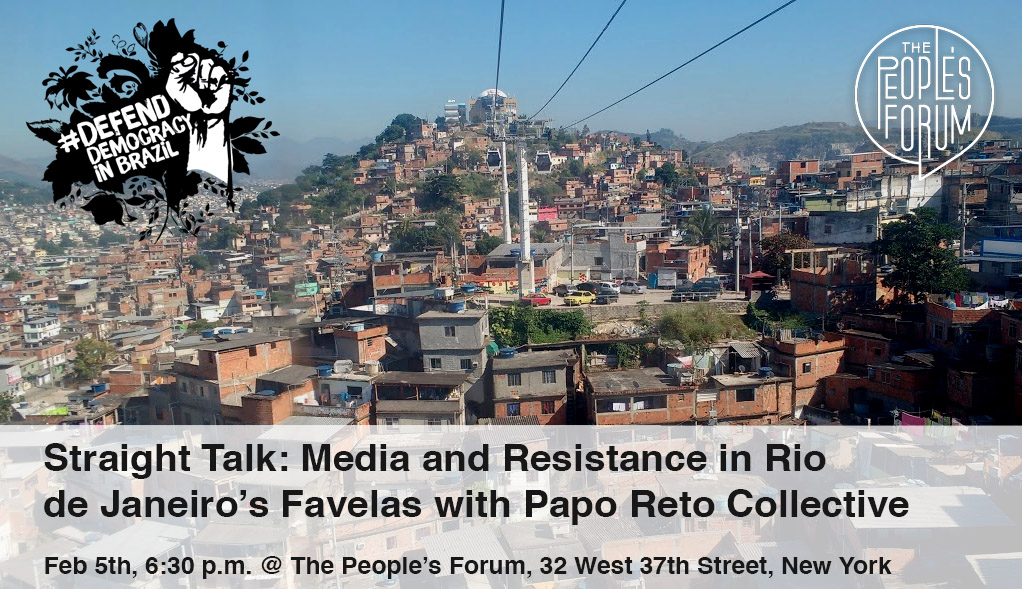 The challenges and threats faced by human rights defenders in Brazil remain very high, particularly for those working on issues of land, environment, indigenous peoples, women and LGBTi rights and police brutality. Many HRDs have experienced death threats, physical attacks, arbitrary arrests and lawsuits. The high number of killings is of particular concern and takes place against a background of widespread impunity.

With the deepening of the political crisis in Brazil, this is an opportunity to share stories, identify common challenges and build solidarity between movements working to end police brutality and empower traditionally marginalized populations.

Raull Santiago is a human rights activist, mediamaker and resident of the Complexo do Alemão favelas in Rio de Janeiro.  Bridge-builder and community mediator, Raull is one of the co-founders of the Coletivo Papo Reto and a member of Frontline Defenders.

Papo Reto is a network of young activists using smartphones and social media to tell their own stories, reporting issues that are relevant to the community, engaging in copwatch and counter stereotypes. Papo Reto’s guerrilla-style journalism is made by, for and with favela residents themselves, is helping create a protective network for residents in times of violence while also fostering spaces for dialogue and exchange. Raull and CPR are also active members of Movimentos, a group of young men and women from favelas that discuss drug policy from the perspective of those who live in favelas. The collective was featured in an extensive article by the New York Times Sunday Magazine, a short documentary by Fusion TV, and a story by AlJazeera on the V App, a copwatch technology developed in New York “A Big Brother – Rebel Geeks”