Rising Blades: A Poetry Series with a Twist 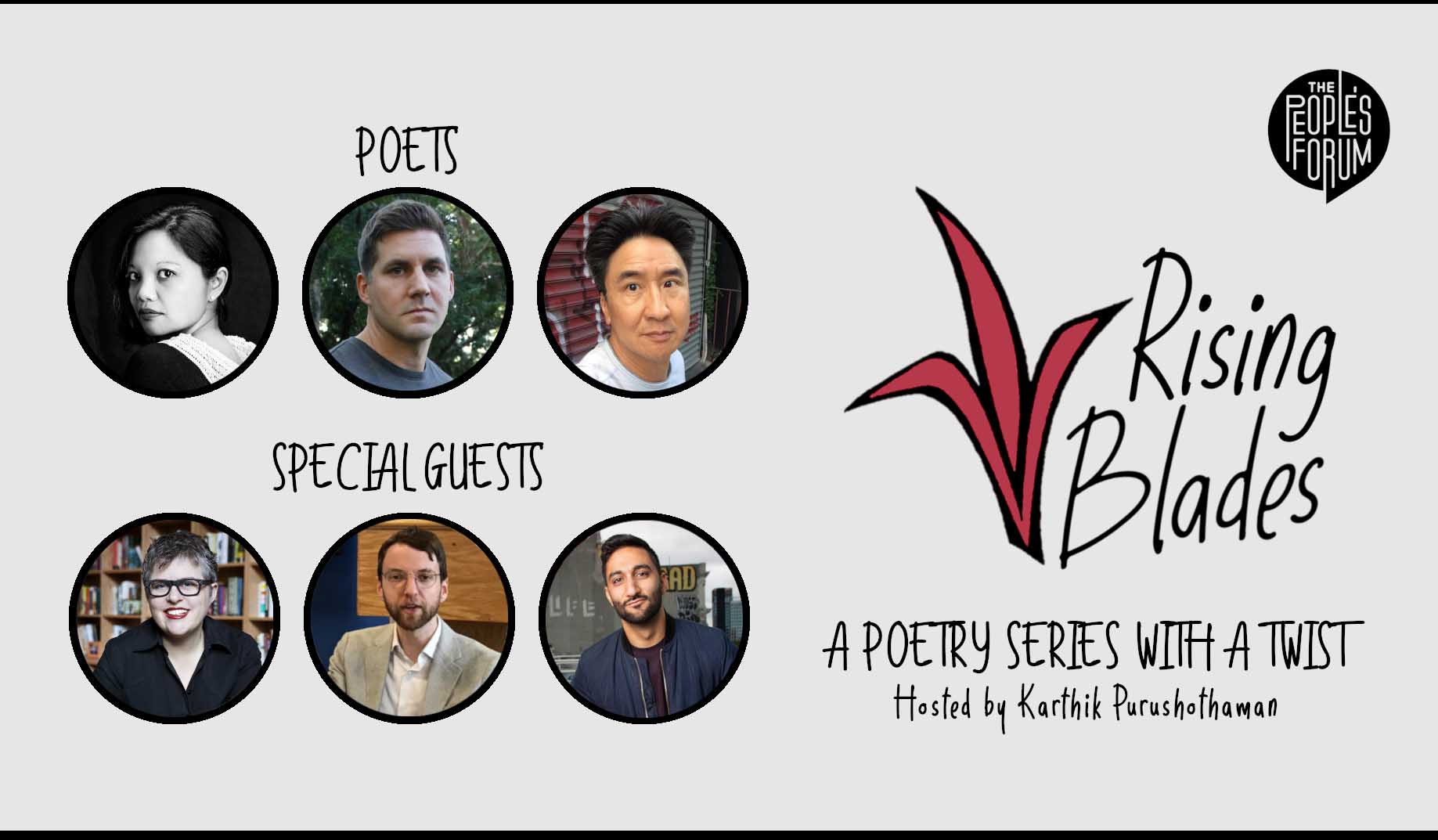 Demand the blades to rise of words, acts, beings…So wrote Whitman in the poem, “Prairie Grass Dividing,” asking those with “a never-quell’d audacity” to rise.

Simply put, “Rising Blades” is a gathering of revolutionaries, in art and action. Who are artists other than workers stitching together formerly unthinkable designs from the fabric of their lives? Who are activists if not artists turning dreams into reality through social reform? Join us in building a forum that showcases creative storytellers and community organizers, for an active audience who will have the chance to participate through an initial open-mic, and a closing Q&A.

10 OPEN-MIC SPOTS AVAILABLE (3 MIN. EACH; ANY FORM)
To pre-register, email Karthik (pugazhendhi.karthik@gmail.com) with your name, name of the piece you want to perform, and how it fits the theme.

On-spot registrations (if available) will begin 6 p.m. day of.

SPECIAL GUESTS
Cris Beam is an author and professor in New York. She has authored five books of fiction and nonfiction, looking at urban poverty, child welfare, lgbtq issues, empathy and madness.

Eli Dvorkin is Editorial & Policy Director of the Center for an Urban Future, where he oversees the development of all publications and advances CUF’s research and recommendations on the critical policy challenges facing New York City.

Bassam Shawl is a Kashmiri-American comedian based in Brooklyn, NY. Originally from Syracuse, NY, he started his comedy career in Washington, DC before moving to New York City. His work has been featured in BuzzFeed and The Daily Beast, and he produces Brown Mirror Comedy at The Stand Comedy Club.

POETS
J. Mae Barizo was born in Toronto, Ontario. She is author of The Cumulus Effect (Four Way Books, 2015), and the recipient of fellowships and awards from Bennington College, the Jerome Foundation, and Poets House. She teaches writing at the New School and Pratt School of Architecture.

Charles Kell is author of Cage of Lit Glass, chosen by Kimiko Hahn for the 2018 Autumn House Press Poetry Prize. He teaches in Rhode Island.

Timothy Liu’s latest book of poems is Let It Ride (Saturnalia, Oct 2019). A reader of occult esoterica, he lives and writes in Manhattan and Woodstock, NY.

HOST
Karthik Purushothaman is a writer from Chennai, India, whose poems have been nominated for The Pushcart Prize and Best New Poets 2018, and have appeared in Boulevard, Hyperallergic, Rattle, Subtropics, and Writers Resist: The Anthology 2018, among others. Karthik previously co-hosted a show at Bowery Poetry Club and Secret Loft featuring elected reps, candidates, academics, activists, comedians, musicians, poets, and Craigslist founder Craig Newmark.