Holding the Future Hostage: A Conference on Hybrid Wars, Sanctions, and Solidarity 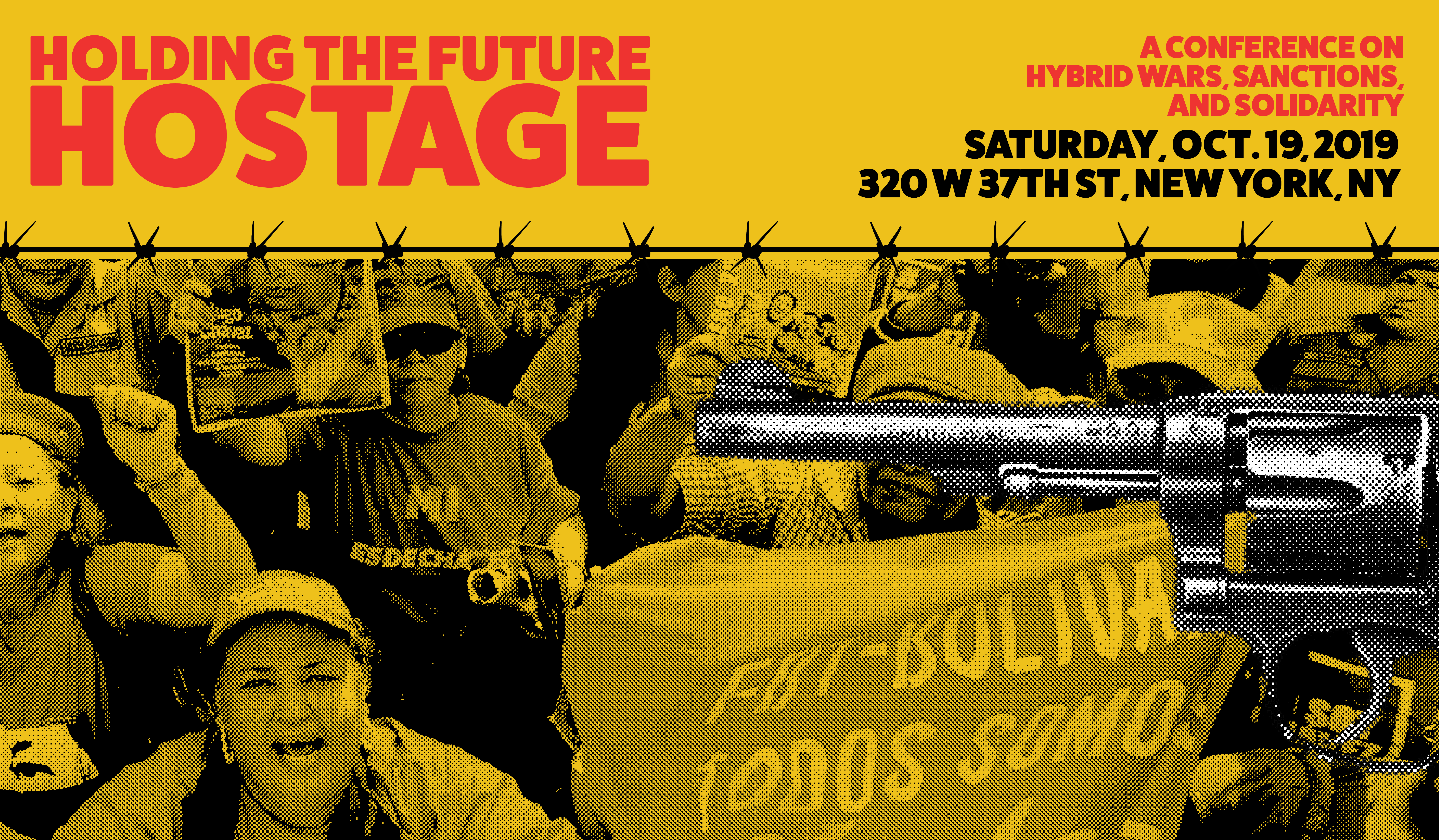 While modern warfare continues to be waged through conventional military operations – such as interventions, bombings, ground troop deployments, and occupations – it increasingly involves an array of unconventional means – such as extreme financial regulations, media censorship, provocations by non-state actors, and perhaps most perniciously, sanctions. This combination of tactics, what some analysts have called a “hybrid war,” has increasingly targeted governments, especially those deemed threats to U.S. hegemony and finance capital.

This conference explores the waging of hybrid wars in dialogue with the historians, journalists, cultural producers, and antiwar activists who are actively documenting and confronting them. The goal of this one-day event will be to better understand how sanctions are holding peoples’ futures hostage around the world. Featuring some of the sharpest, bravest, and boldest voices in North America, this event will also elevate alternative visions of internationalist solidarity that are animating political and social movements against hybrid wars today.

Taína Asili is a New York-based Puerto Rican singer, filmmaker and activist carrying on the tradition of her ancestors, fusing past and present struggles into one soulful and defiant voice. Her music combines powerful vocals carrying themes of hope and liberation with an energetic fusion of Afro-Latin, reggae and rock.

Bomba Yo ignites the ancestral rhythms of Bomba, an African derived music and dance tradition developed in Puerto Rico. The synergy of call and response singing, drumming and dance provide the foundation for a dynamic interplay between the solo drummer and dancer.

Ben Becker is a long-time organizer in New York City and nationally with the ANSWER Coalition, which has led mass protests against U.S. interventionism in Latin America, Africa, Asia and the Middle East. He has edited several publications including Imperialism in the 21st Century: Updating Lenin’s Thesis a Century Later.

Medea Benjamin is the co-founder of the women-led peace group CODEPINK and the co-founder of the human rights group Global Exchange. She has been an advocate for social justice for more than 40 years. Described as “one of America’s most committed — and most effective — fighters for human rights” by New York Newsday, and “one of the high profile leaders of the peace movement” by the Los Angeles Times, she was one of 1,000 exemplary women from 140 countries nominated to receive the Nobel Peace Prize on behalf of the millions of women who do the essential work of peace worldwide. She is the author of ten books, including Drone Warfare: Killing by Remote Control and Kingdom of the Unjust: Behind the U.S.-Saudi Connection. Her most recent book, Inside Iran: The Real History and Politics of the Islamic Republic of Iran, is part of a campaign to prevent a war with Iran and instead promote normal trade and diplomatic relations. Her articles appear regularly in outlets such as The Guardian, The Huffington Post, CommonDreams, Alternet and The Hill.

Jordan T. Camp is Director of Research at the People’s Forum, Visiting Scholar in the Center for Place, Culture and Politics at the CUNY Graduate Center, and Co-Director of the Racial Capitalism Working Group in the Center for Social Difference at Columbia University. He is the author of Incarcerating the Crisis: Freedom Struggles and the Rise of the Neoliberal State (University of California Press, 2016); co-editor (with Christina Heatherton) of Policing the Planet: Why the Policing Crisis Led to Black Lives Matter (Verso, 2016), co-editor (with Laura Pulido) of Clyde Woods’ posthumously published book, Development Drowned and Reborn: The Blues and Bourbon Restorations in Post-Katrina New Orleans (University of Georgia Press, 2017); and co-editor of Freedom Now! Struggles for the Human Right to Housing in LA and Beyond (Freedom Now Books, 2012). His work also appears in American Quarterly, Antipode, Environment and Planning D: Society and Space, Eurozine, Jacobin, Kalfou: A Journal of Comparative and Relational Ethnic Studies, Ord & Bild, Race & Class, and Social Justice, as well as edited volumes including: In the Wake of Hurricane Katrina (Johns Hopkins University Press, 2010), Race, Empire, and the Crisis of the Subprime (Johns Hopkins University Press, 2013), and Futures of Black Radicalism (Verso, 2017). He is currently working on a new book entitled, The Long Vendetta: Counterinsurgency and the Survival of Capitalism.

Rev. Claudia de la Cruz is a popular educator, community organizer and theologian. In her role as Executive Director at The People’s Forum, Claudia is committed to contribute her experiences and skills in the creation of cultural-educational space with organizers, educators and cultural workers/artists to continue producing, promoting and uplifting the cultural traditions that nourish and strengthen our communities in our struggles towards social justice. For over 20 years, she has been committed to movement building, and has actively participated in collective grassroots spaces, particularly in the communities of Washington Heights and The South Bronx. Claudia was Pastor of her home-church, Iglesia San Romero de Las Americas-UCC- a community church rooted in the traditions of Latin American Liberation Theology and grassroots organizing. Through her ministry she found her passion, and has dedicated most of her life to the leadership development of youth through political education and culture.

Christina Heatherton is an American Studies scholar and historian of anti-racist social movements. She is currently an Assistant Professor of American Studies at Barnard College, completing her first book, The Color Line and the Class Struggle: The Mexican Revolution, Internationalism, and the American Century (University of California Press, forthcoming). With Jordan T. Camp she recently edited Policing the Planet: Why the Policing Crisis Led to Black Lives Matter (Verso Books, 2016). Her work appears in places such as American Quarterly, Social Justice, Interface, Feminists Rethink the Neoliberal State: Inequality, Exclusion and Change, edited by Leela Fernandes (New York University Press, 2018), Futures of Black Radicalism, edited by Gaye Theresa Johnson and Alex Lubin (Verso Books, 2017), and The Rising Tides of Color: Race, State Violence, and Radical Movements Across the Pacific, edited by Moon-Ho Jung (University of Washington Press, 2014). Her writing also appears in popular venues such as Funambulist Magazine, The Washington Spectator, and 032 Magazine. With Jordan T. Camp she previously co-edited Freedom Now! Struggles for the Human Right to Housing in LA and Beyond (Freedom Now Books, 2012). She is the editor of Downtown Blues: A Skid Row Reader (Freedom Now Books, 2011).

Gerald Horne is Moores Professor of History at the University of Houston.  His research has addressed issues of racism in a variety of relations involving labor, politics, civil rights, international relations and war. He has also written extensively about the film industry. He is the author of more than thirty books including The Apocalypse of Settler Colonialism: The Roots of Slavery, White Supremacy and Capitalism in Seventeenth Century North America and the Caribbean (2018); Paul Robeson: The Artist as Revolutionary, (2016) Black Revolutionary:  William Patterson and the Globalization of the African-American Freedom Struggle (2014). He received his Ph.D. in history from Columbia University, his J.D. from the University of California, Berkeley, and his B.A. from Princeton University.

Anya Parampil is a journalist based in Washington, D.C. She previously hosted a daily progressive afternoon news program called In Question on RT America. She has produced and reported several documentaries, including on-the-ground reports from the Korean peninsula and Palestine.

Vijay Prashad is an Indian historian and journalist. Prashad is the author of twenty-five books, including The Darker Nations: A People’s History of the Third World and The Poorer Nations: A Possible History of the Global South, and ten edited volumes, including Land of Blue Helmets: The United Nations in the Arab World. As a journalist, he writes regularly for The Hindu (India), Frontline (India), BirGün (Turkey) and Alternet (USA) and appears regularly on The Real News Network and Democracy Now. He is the Chief Editor of LeftWord Books (New Delhi). He has appeared in two films – Shadow World (2016) and Two Meetings (2017). For twenty five years, he was a professor at Trinity College; he has also been the Edward Said Chair at the American University of Beirut, where he was a Senior Fellow of the Issam Fares Institute for Public Policy.

Jeremy Scahill is one of the three founding editors of The Intercept. He is an investigative reporter, war correspondent, and author of the international best-selling books, Dirty Wars: The World Is a Battlefield and Blackwater: The Rise of the World’s Most Powerful Mercenary Army. He has reported from Afghanistan, Iraq, Somalia, Yemen, Nigeria, the former Yugoslavia, and elsewhere across the globe. Scahill has served as the national security correspondent for The Nation and Democracy Now!. Scahill’s work has sparked several congressional investigations and won some of journalism’s highest honors. He was twice awarded the prestigious George Polk Award, in 1998 for foreign reporting and in 2008 for “Blackwater.” Scahill is a producer and writer of the award-winning film “Dirty Wars,” which premiered at the 2013 Sundance Film Festival and was nominated for an Academy Award.

Margaret Stevens is a scholar and community leader, an Associate Professor of History and Director of the Urban Issues Institute at Essex County College in Newark. She is the author of Red International and Black Caribbean: Communists in New York City, Mexico and the West Indies, 1919-1939 (London: Pluto Press, 2017), and a contributor to the volume Communist Histories, Volume 1, ed. Vijay Prashad (LeftWord Books, 2016).