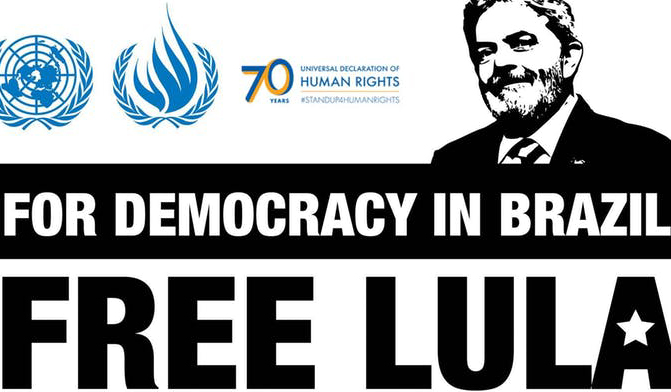 On December 10th, 2018 , the 70th anniversary of the International Human Rights Day, the People’s Forum and the Defend Democracy in Brazil New York Committee will gather at 7 p.m. to discuss Human Rights in Brazil and to institute the Free Lula Day.

The event will count on speakers: Maria Luisa Mendonça (CUNY), who will speak about Human Rights and Social Justice in Brazil and Douglas Belchior (UNEAFRO Brasil), speaking on behalf of the Afro-Brazilian community and the work UNEAFRO does to guarantee access to Higher Education to people of color. Videos and photos of the struggle for rights, and of the Former President Lula da Silva will remember this leader for social justice and mark the growing campaign to free Lula, with a performance of the Universal Declaration of Human Rights.

The National Committee Free Lula, together with Frente Brasil Popular, which brings together more than 80 Brazilian social movements and organizations, is organizing the International Action Free Lula on this day. Solidarity gatherings will take place in several cities in Brazil and abroad, with the intention to raise awareness and disseminate trustworthy information about the case to the public.

Also, on December 10 and 12, Perseu Abramo Foundation, The Free Lula International Committee and the Workers Party (PT) International Relations, will be hosting the International Conference in defense of Democracy. The conference takes place in São Paulo and will bring representatives from left organizations and political parties from Spain, Uruguai, Portugal and members of the European Parliament.

They will discuss and develop the fight for democracy and the resistance to retrocess in public policies, social inclusion and foreign policy, as well as the intent to criminalize social movements. The New York event will align in the discussion of strategies abroad to safeguard the people’s rights.

Maria Luisa Mendonça is a visiting scholar in the Center for Place, Culture and Politics at the Graduate Center of the City University of New York (CUNY). She holds a PhD in Philosophy and Social Sciences with a focus on Human Geography from the University of Sao Paulo (USP). She is the founder of Rede Social de Justiça e Direitos Humanos (Network for Social Justice and Human Rights – www.social.org.br) in Brazil and the editor of the book “Human Rights in Brazil,” which has been published annually since 2000. This year’s edition was launched December 5th and denounces the decline of policies for human rights in Brazil in all sectors. She was one of the founders of the World Social Forum. As an activist, she collaborates with organizations and social movements like Defend Democracy in Brazil and The Center for Economic and Policy Research.

Douglas Belchior is a Historian, teacher and Founder of the Black organization UNEAFRO-Brasil. Douglas is a writer of the Blog Negro Belchior in CartaCapital. Douglas is a leadership in the Black Movement in Brazil and was a candidate for the House of Representatives in the 2018 election. Visit uneafrobrasil.org for more information.