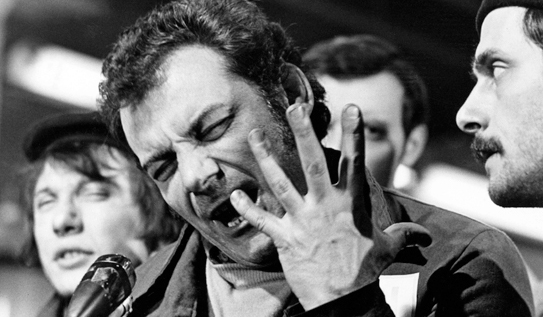 If this Italian drama were any less well told, it would come off as a pure union propaganda piece. Instead, it is a worthy film for the director who made the acclaimed film Investigation of a Citizen Above Suspicion. In any manufacturing situation, it simply doesn’t pay to be the fastest and hardest working person on the assembly line. In the first place, you probably can’t keep up the pace you’ve set. In the second place, you make all your co-workers a) look bad and b) have to work harder; they will not thank you for this. Lulu Massa (Gian Maria Volonte) is a highly productive worker at a factory paying piece work but is disliked by his colleagues as his efficiency is used by management to justify their demands for higher output. While employees are told to care for and rely on their machines, they see radical students outside the factory campaigning for higher pay rates and less work. Lulu lives with Lidia and her son. He puts his lack of interest in sex with her down to the pressures of the job.

Lulu loses a finger in a work accident, which the workers blame on the faster times. Shocked, he adopts the students’ analysis and takes strike action to end piece work, against the unions’ policy, which is for simply an increase in piece work rates.During that time, he visits a colleague who shows him not only the error of his own ways, but the horror of his whole working situation. When he goes back to work, Massa tries to organize a union. –adapted from the allmovie guide.