BOOK TALK + PANEL: When Farmers Stood Up with Leftword Books 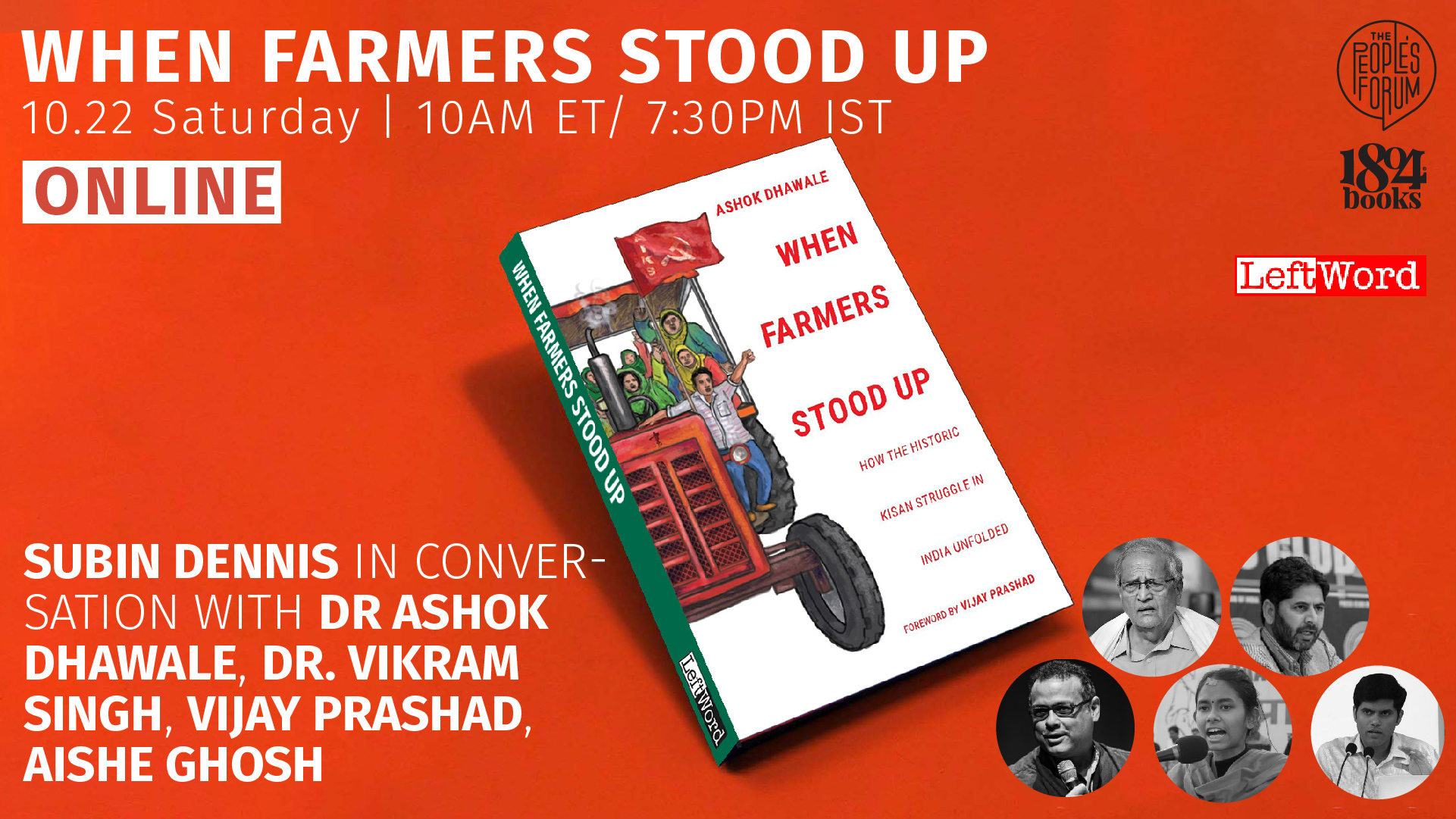 Join 1804 Books and Leftword Books for an online discussion on the recent publication, When Farmers Stood Up: How the Historic Kisan Struggle in India Unfolded. We will be joined by the author Dr. Ashok Dhawale; along with Dr.Vikram Singh, joint-secretary of the All India Agricultural Workers’ Union; Vijay Prashad, author, Executive Director of Tricontinental: Institute for Social Research, Chief Correspondent for Globetrotter, and Editor at LeftWord Books; and Aishe Ghosh, Indian politician and student activist for a discussion, moderated by Subin Dennis of the Tricontinental Institute.

In the summer of 2020, the Narendra Modi government pushed through three anti-farmer, pro-corporate bills in parliament. This came after decades of cuts in subsidies and price supports to the farmers, leading to deaths by suicide of 400,000 debt-ridden farmers, a fourth of them since Modi became prime minister in 2014.

On 26 November 2020, farmers began a heroic protest that lasted through the pandemic, police repression, government callousness and attacks, and harsh weather. It was the largest peaceful mass mobilization of contemporary times on the planet. A week before the first anniversary of the protest, Modi surrendered.

Ashok Dhawale is President of the All India Kisan Sabha. A medical doctor by training, he began activism as a student. He was drawn into the Kisan movement by the legendary Godavari Parulekar. He is a member of the Polit Bureau of the Communist Party of India (Marxist).

Vikram Singh is a joint secretary of the All India Agricultural Workers’ Union.

Vijay Prashad is the author or editor of about thirty books, including The Darker Nations: A Biography of the Short-Lived Third World, and Washington Bullets. He is the Executive Director of Tricontinental: Institute for Social Research, Chief Correspondent for Globetrotter, and Editor at LeftWord Books.

Aishe Ghosh is an Indian politician and student activist. She is the president of the Jawaharlal Nehru University Students’ Union and is a member of the Students’ Federation of India. She was also the CPI(M) candidate from Jamuria constituency for the 2021 West Bengal Legislative Assembly election.

Subin Dennis is an economist and activist based in New Delhi. Hailing from Kerala, he holds M.A. and MPhil. degrees in economics from Jawaharlal Nehru University, New Delhi. He was active with the student movement and served as the Delhi State Vice-President of the Students’ Federation of India (SFI). Subin’s writings in English and Malayalam on issues related to economy and politics appear in various periodicals and websites. He worked with the online news portal NewsClick as a writer before joining Tricontinental.