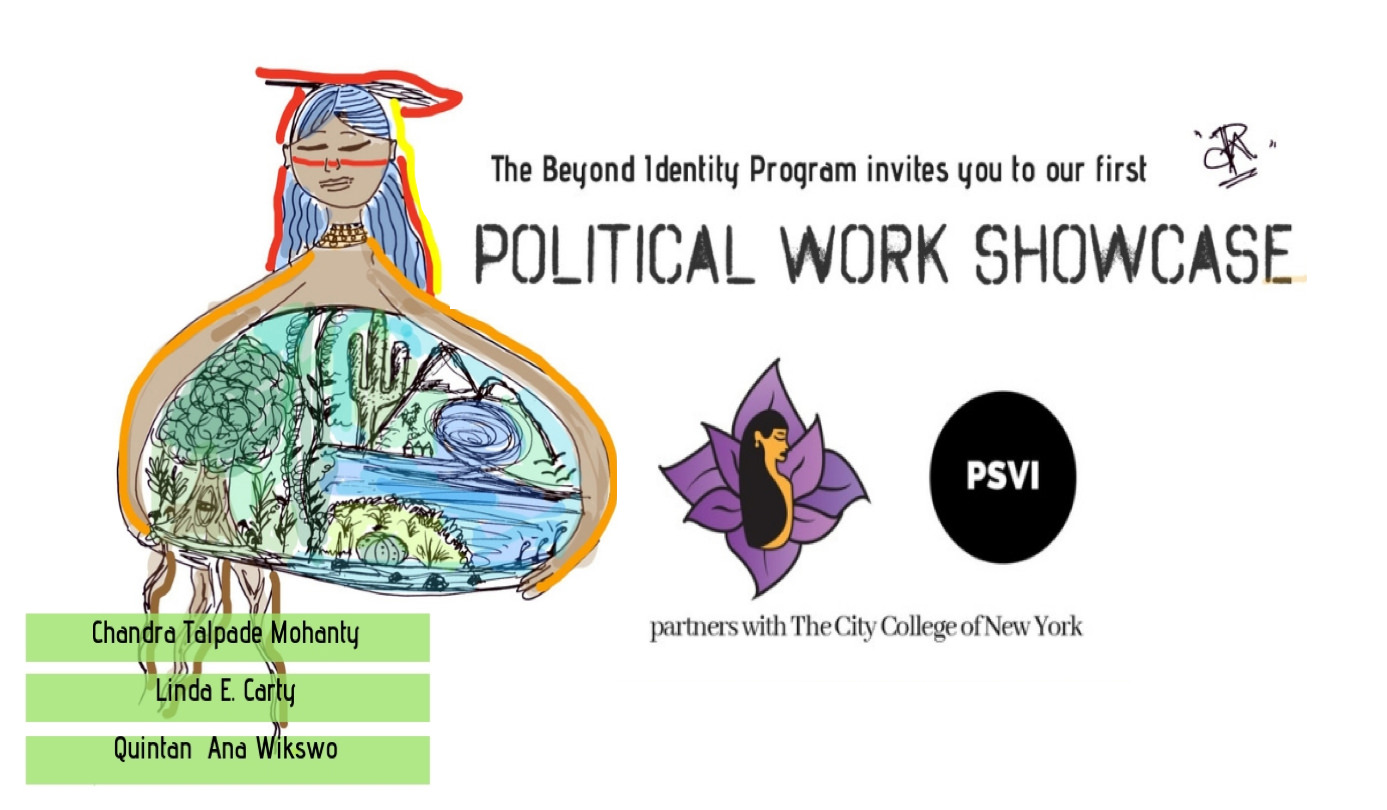 Join us as we celebrate and debut our scholar-activists’ and their political work alongside senior scholar activist’s Chandra Talpade Mohanty , Linda E. Carty, and Quintan Ana Wikswo.

We are a program based at The City College of New York (CUNY). “The program trains young women/non-binary/trans folks of color from both immigrant and U.S.-based minority communities in identity-driven research, allowing them to draw on lived experiences of discrimination and violence to inform the research agendas and political writing that will be the foundation of distinctive political projects.”

Chandra Talpade Mohanty “focuses on the politics of difference and solidarity; the relation of feminist knowledges and scholarship to organizing and social movements, mobilizing a transnational feminist anti-capitalist critique; decolonizing knowledge, and theorizing agency, identity and resistance in the context of feminist transborder solidarity. My current work 1) examines the politics of neoliberalism and in the academy and in social movements, and 2) focuses on the development of a feminist video archive that curates intergenerational kitchen table conversations with feminist scholar-activists from around the world.”  (Source)

Linda E. Carty “is a Black feminist scholar-activist and educator in the African American studies department at Syracuse University. Linda’s activist and research work spans Black labor struggles, migration, and sexuality in Canada, the Caribbean, and the United States. She is author of the articles “A Genealogy of Marxist Feminism in Canada” (2014); “Not a Nanny: A Gendered, Transnational Analysis of Caribbean Domestic Workers in New York City” (2003); and “The Discourse of Empire and the Social Construction of Gender” (2002). Linda is editor of the anthology And Still We Rise: Feminist Mobilization in Contemporary Canada (1993). She is coauthor/contributor to We’re Rooted Here: Essays in African Canadian Women’s History (1994) and Unsettling Relations: The University as a Site of Feminist Struggles (1991).” (Source)

Quintan Ana Wikswo “has long been active in the collusion and collision of art and social justice. Her conceptually-based interdisciplinary projects integrate her fiction, poetry, memoir, and essay with her original photographs, performance, and video. These semi-autobiographical projects inhabit occluded and obscured sites over time, and dwell within complex histories at the intersection of gender, disability, queerness, and race, with a special focus on human rights aftermath issues.” (Source)

Beyond Identity: A Gendered Platform for Scholar-Activists