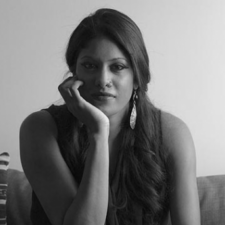 Nimmi Gowrinathan is a writer, a scholar, and an activist. She is a Professor at the City College of New York, where she founded the Politics of Sexual Violence Initiative, a global initiative that draws on in-depth research to inform movement-building around the impact of sexual violence on women’s political identities. As a key part of this initiative she created Beyond Identity: A Gendered Platform for Scholar-Activists, a program that seeks to train immigrants and students of color in identity-driven research, political writing, and activism anchored in a thoughtful analysis of structural violence. Nimmi has been an analyst and policy consultant on women’s political voice and participation in violence in South Asia for the International Crisis Group, UN Women, and the Asian Development Bank. She provides expert analysis for CNN, MSNBC, AL Jazeera, and the BBC and has been published in Harper’s Magazine, Freeman’s Journal, Foreign Affairs, and Guernica Magazine among others. Dr. Gowrinathan is the creator of the Female Fighter Series at Guernica Magazine and the Publisher of Adi, a new literary journal to rehumanize policy. Her work, and writings, can be found at www.deviarchy.com. Her book, Radicalizing Her, examines the complex politics of the female fighter (Beacon 2021)

Past Classes with Nimmi Gowrinathan 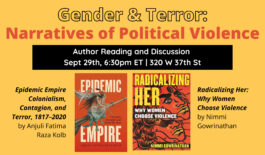 Please join us for an in-person reading and discussion with authors NIMMI GOWRINATHAN and ANJULI RAZA KOLB. Both authors will read short excerpts from their recent books and engage each other on overlapping questions on feminism and its discontents and the meaning of political violence.
Event Categories:
Book Talks, Classes, Education