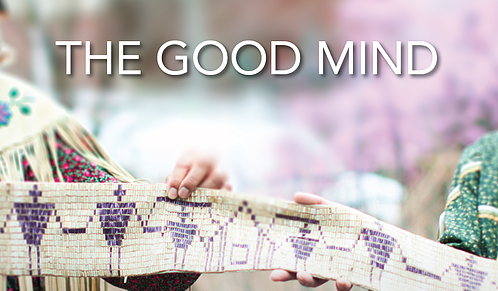 “How do you instruct seven billion people as to their relationship to the earth?” This award-winning film follows Onondaga Nation leaders as they continue the efforts of their ancestors to protect their sovereignty and culture, seek justice for the wrongs done to their traditional lands, and work to prevent further harm.

The Onondaga Nation in central New York State is the Central Fire of the Haudenosaunee (Iroquois Confederacy).  This sovereign Indigenous government advocates for the environment and shares prophecies about climate change, while engaged in a battle with the state over ancestral lands stolen in defiance of a treaty with George Washington. The Good Mind is the Onondaga and Haudenosaunee philosophy and way of life.  When the Peacemaker brought his message 1,000 years ago to the shores of sacred Onondaga Lake, he united warring peoples with a system of governance based on using the Good Mind to make decisions not only for the present, but for the next seven generations.

*Join us for a discussion with filmmaker Gwendolen Cates after the film.