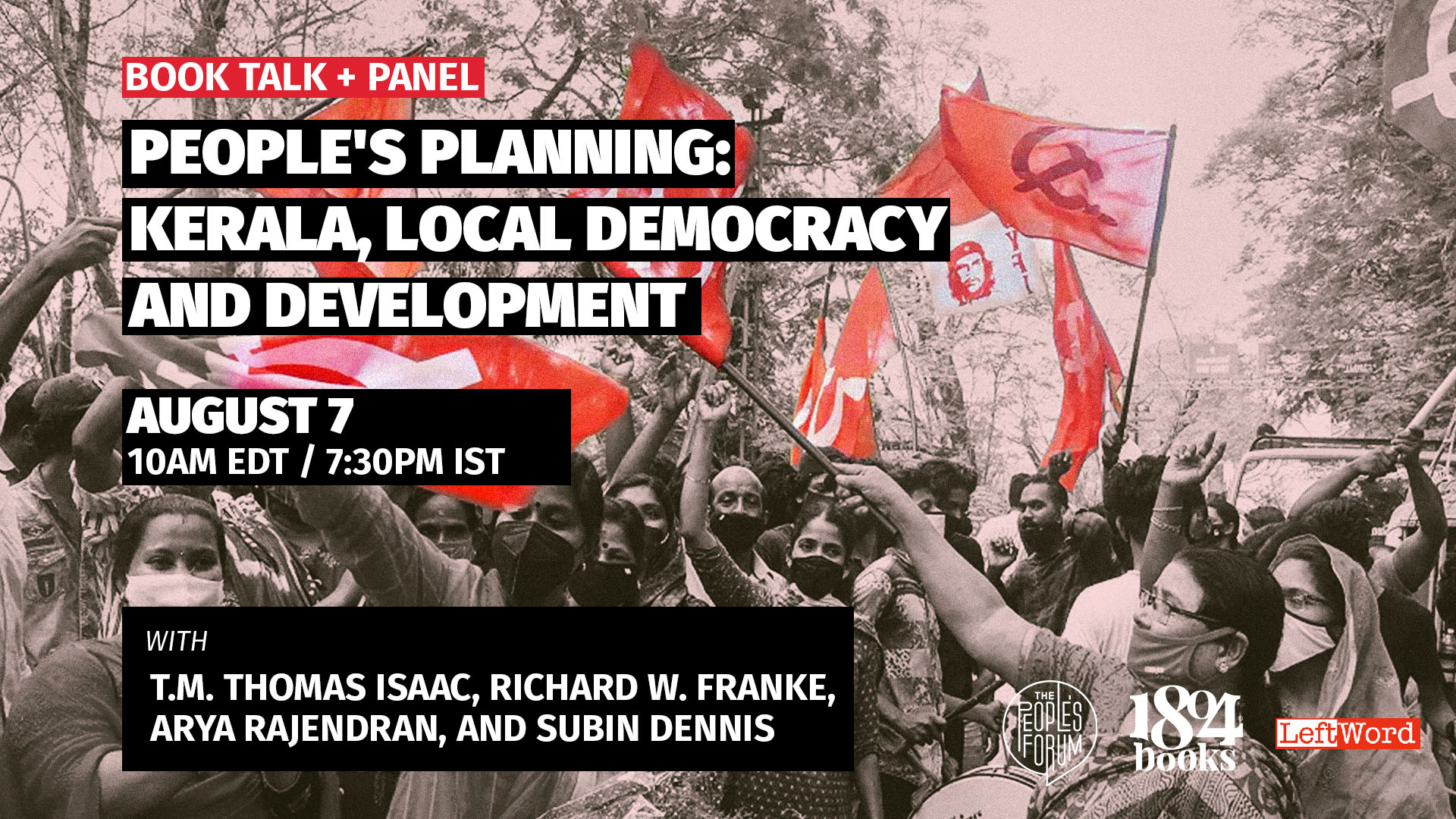 Join 1804 Books and Leftword Books for a discussion on the recent publication, People’s Planning: Kerala, Local Democracy and Development. We will be joined by authors  T.M. Thomas Isaac and Richard W. Franke, as well as Arya Rajendran, Mayor of the Thiruvananthapuram Corporation, for a discussion moderated by Subin Dennis of the Tricontinental Institute.

Register for the link below, and you can purchase the book at 1804 Books (North America) or Leftword Books (India)!

In 1996, the state of Kerala launched possibly the world’s most extensive and successful experiment in decentralization. The campaign mobilized over 3 million of Kerala’s 30 million people and resulted in bottom-up development planning in all of its 1,052 villages and urban neighborhoods.  This book details the background of the campaign, traces its stages, assesses problems and successes, and evaluates concrete results and reforms. It tells a powerful story of mass mobilization and innovation, achieved by overcoming bureaucratic opposition and rooting out corruption and cynicism.

Considering the theoretical and applied significance of the campaign — both in the context of India’s development since Independence and the international debates on decentralization, civil society, and empowerment — this study provides invaluable lessons for sustainable development worldwide.

T.M. THOMAS ISAAC is the Minister of Finance of Kerala, an office he previously served from 2006 to 2011. Author of numerous academic papers and books, he was Professor at Centre for Development Studies, Thiruvananthapuram. During his tenure as a member of the Kerala State Planning Board, he was in charge of the People’s Plan Campaign.

ARYA RAJENDRAN serves as the Mayor of the Thiruvananthapuram Corporation, the largest urban body in Kerala.
She is from the Communist Party of India (Marxist). Appointed at the age of 21 she is the youngest Mayor in India.

SUBIN DENNIS is an economist and activist based in New Delhi. Hailing from Kerala, he holds M.A. and MPhil. degrees in economics from Jawaharlal Nehru University, New Delhi. He was active with the student movement and served as the Delhi State Vice-President of the Students’ Federation of India (SFI). Subin’s writings in English and Malayalam on issues related to economy and politics appear in various periodicals and websites. He worked with the online news portal NewsClick as a writer before joining Tricontinental.