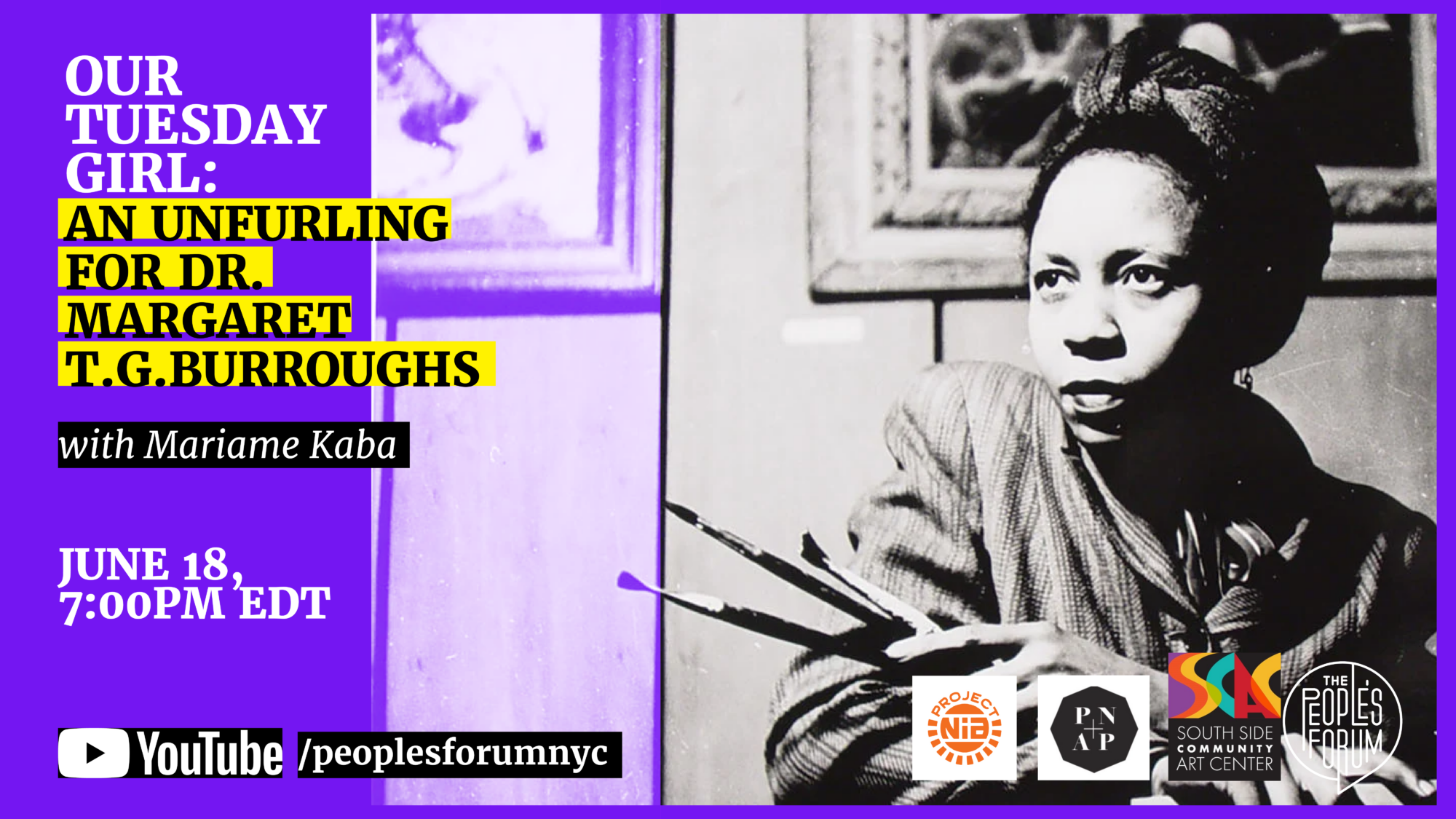 Join us on June 18th for a special Juneteenth event honoring Dr. Margaret Burroughs with a new book titled Our Tuesday Girl: An Unfurling for Dr. Margaret T. G. Burroughs published by Sojourners for Justice Press and Project NIA.

Dr. Margaret T. G. Burroughs was born in Saint Rose, Louisiana and moved to Chicago as a child.  She was an educator, community organizer, activist, artist, poet, historian and she built some of the city’s great, lasting institutions including the DuSable Museum. She had an immense influence on the political and cultural life of Chicago and the lives of people she met.

This new collection reflects her early life, her organizing and correspondence and her impact as an educator at Stateville and Pontiac prisons and Cook County Jail. In addition, a special section of this publication includes an Unfurling, a social practice whereby people, as liberatory memory workers, pull materials from existing archives and share what those materials mean to them.

For this Unfurling we turned to artists and writers whose work is influenced by the legacy of Dr. Burroughs. In this way, this collection iterates the impact of Dr. Burroughs and her politics of culture, care, freedom and love for Black people.

This event will include readings from Our Tuesday Girl: An Unfurling for Dr. Margaret T. G. Burroughs along with a discussion of the role of cultural organizing in the midst of anti-black state violence. Panelists will also consider how Dr. Burroughs’s prisoner education and support work is a model for current abolitionist organizers.

This event is co-sponsored by Project NIA, Prison + Neighborhood Arts/Education Project, the South Side Community Art Center, and The People’s Forum.

Mariame Kaba is an organizer, educator, curator, and prison industrial complex (PIC) abolitionist who is active in movements for racial, gender, and transformative justice. Kaba is the founder and director of Project NIA, a grassroots abolitionist organization with a vision to end youth incarceration. Mariame is currently a researcher at Interrupting Criminalization: Research in Action at the Barnard Center for Research on Women, a project she co-founded with Andrea Ritchie in 2018.  Mariame’s leadership, organizing and influence extend widely as she offers a radical analysis that influences how people think and respond to how violence, prisons and policing affect the lives of people of color. Kaba is the author of Missing Daddy (Haymarket 2019). Her current book, We Do This Til We Free Us: Abolitionist Organizing and Transforming Justice, a New York Times Bestseller, was published by Haymarket Press in February 2021 (available at 1804 Books).

Tempestt Hazel is a writer, curator, artist advocate, and co-founder of Sixty Inches From Center. Established in 2010, Sixty is a collective of writers, editors, artists, curators, librarians, and archivists who publish writings and produce collaborative projects about artists, archival practice, and culture in the unceded lands referred to as Chicago and the Midwest. She was born and raised in Peoria, Illinois and has maintained roots in both Peoria and Chicago for over 12 years.

Skyla S. Hearn is an archivist, special collections librarian, visual artist and co-founder of The Blackivists—a collective of trained Black archivists who prioritize Black cultural heritage preservation and memory work. Skyla is most concerned with supporting a community’s attempt to understand, document and share its own history, particularly those that have not been well recorded; to expand archives to include increased representation and to diversify mainstream historical records. She is a homegrown Chicagoan by way of Mississippi.

Sarah Ross is an artist and educator who co-founded the Prison + Neighborhood Arts/Education Project (PNAP), a cultural project that brings together artists, writers and scholars in and outside Stateville prison to create public projects about justice and freedom. She is also a member of Chicago Torture Justice Memorials a grassroots organization of artists, activists, educators, attorneys and survivors of police torture who helped pass and implement reparations with survivors of Chicago police torture.

Carl Williams was wrongfully convicted at age 17 and served almost 27 years in prison. He is a torture survivor, activist, and a Learning Fellow at Chicago Torture Justice Center. Carl was also a student of Dr. Margaret Burroughs.