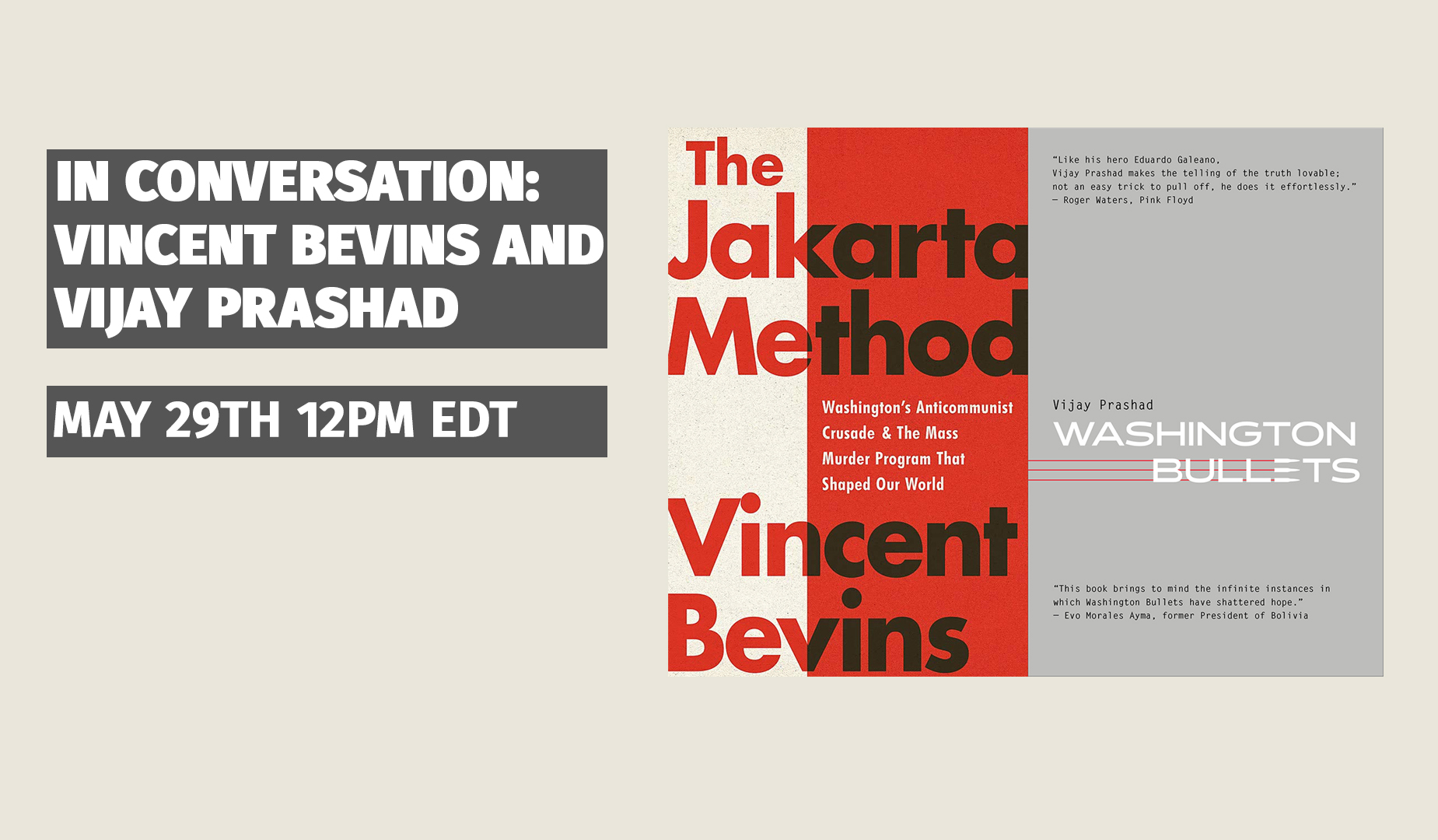 Join author of The Jakarta Method Vincent Bevins and author of Washington Bullets Vijay Prashad for a conversation moderated by Jordan T. Camp about how Washington’s anti-communist wars have shaped our world.

You can purchase a copy of The Jakarta Method at www.thejakartamethod.com

Vincent Bevins is an award-winning journalist and correspondent. He covered Southeast Asia for the Washington Post, reporting from across the entire region and paying special attention to the legacy of the 1965 massacre in Indonesia. He previously served as the Brazil correspondent for the Los Angeles Times, also covering nearby parts of South America, and before that he worked for the Financial Times in London. Among the other publications he has written for are the New York Times, The Atlantic, The Economist, the Guardian, Foreign Policy, the New York Review of Books, Folha de S.Paulo, The New Republic, The New Inquiry, The Awl, The Baffler, and New York magazine. Vincent was born and raised in California and spent the last few years living in Jakarta.

Vijay Prashad is an Indian historian and journalist. Prashad is the author of thirty books, including Washington Bullets, Red Star Over the Third World, The Darker Nations: A People’s History of the Third World and The Poorer Nations: A Possible History of the Global South. He is the Chief Correspondent for Globetrotter and a Columnist for Frontline (India). He is the Director of Tricontinental: Institute for Social Research and Chief Editor of LeftWord Books (New Delhi). He has appeared in two films – Shadow World (2016) and Two Meetings (2017).

Jordan T. Camp is Director of Research at The People’s Forum, Visiting Scholar in the Center for Place, Culture and Politics at the CUNY Graduate Center, and Co-Director of the Racial Capitalism Working Group in the Center for the Study of Social Difference, Columbia University. His books include Incarcerating the Crisis: Freedom Struggles and the Rise of the Neoliberal State (University of California Press, 2016), Policing the Planet: Why the Policing Crisis Led to Black Lives Matter (co-editor with Christina Heatherton, Verso, 2016), and most recently, Futures Held Hostage: Confronting U.S. Hybrid Wars and Sanctions in Venezuela (co-editor with Manu Karuka, Pluto Press, forthcoming).