From Malcolm X to Now: Struggle for Human Rights in the post-Trump Era 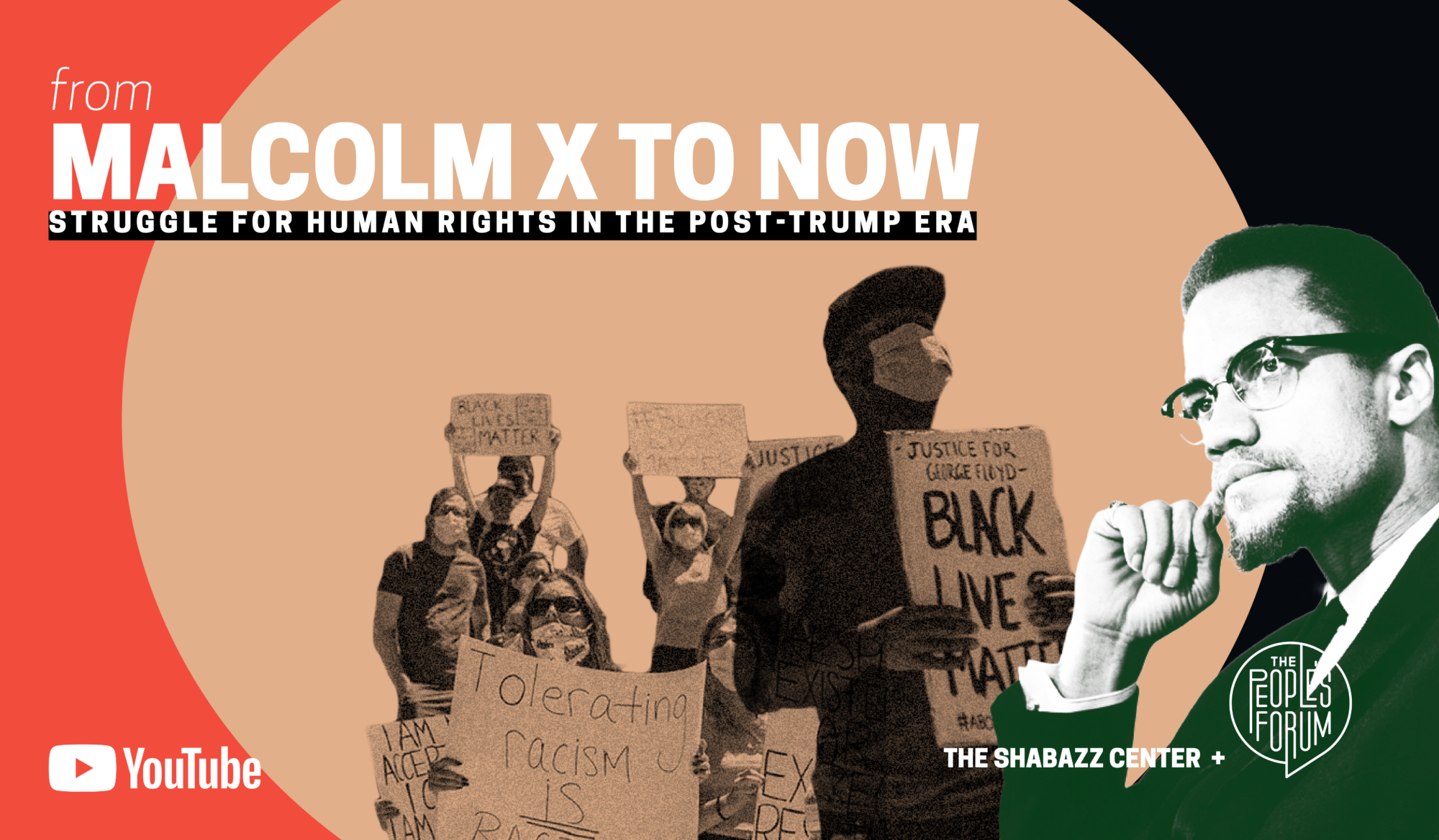 In 1964, Malcolm X spoke before the Organization of African Unity, calling for the United States to be indicted for its racist and systematic repression of Black people. “This is a world problem, a problem for humanity,” he indicated. “It is not a problem of civil rights, it is a problem of human rights!” Over 50 years later, Malcolm’s message rings true as white supremacy and capitalism continue their violent hold over Black lives. We invite you to join in conversation with organizers and scholars who will help us reframe and better understand the struggle for human rights and black liberation in the interim of a transition from Trump to the Biden administration.

Najha Zigbi-Johnson was born and raised in Harlem, New York City, and is committed to Black power and building social movements through cultural and civic engagement work. Najha is a graduate of Guilford College and most recently of Harvard Divinity School, where she explored Black American social movement history and Black cultural production as a Presidential Scholar. Najha co-founded and led the popular education, student-led course Freedom School: A Seminar on Theory and Praxis for Black Studies in the United States while at Harvard. She also co-edited the adjoining Freedom School Magazine. In addition to her academic background, Najha is a product of the Southern, youth-organizing institute Ignite North Carolina, where she was heavily involved in statewide organizing efforts around the Movement for Black Lives. Currently, Najha is back in Harlem (her forever home) with The Malcolm X & Dr. Betty Shabazz Memorial and Educational Center, where she is helping to formally restart and grow the institution as the Director of Institutional Advancement.

Dr. Charisse Burden-Stelly is an Author, Scholar and Educator. She is currently a visiting scholar in the Race and Capitalism Project at the University of Chicago. She also serves as an Assistant Professor of Africana Studies and Political Science at Carleton College. Along with Dr. Gerald Horne, Burden-Stelly co-authored the book W.E.B. Du Bois: A Life in American History. She completed her Ph.D. in African Diaspora Studies at the University of California, Berkeley in 2016. She holds an M.A. in African American Studies from the University of California, Berkeley, and a B.A. in Political Science and in African and African American Studies from Barrett Honor College at Arizona State University. Her scholarship traverses Africana Studies, Critical Theory, Political Theory, and Political Economy with a substantive focus on antiradicalism, anti-blackness, and state-sanctioned violence; globalization and economic development; and epistemologies of Black Studies.

Claudia De la Cruz is an educator, community organizer, and theologian. She is Co-Executive Director of The People’s Forum in New York City – a cultural and political education space that serves to convene, support and exchange with US and international social movements committed to advance the struggles of the poor and dispossessed. For over 20 years, Claudia has worked with social movements, and has actively participated in the creation of collective spaces committed to education and the promotion of working-class culture in the US, and internationally. She holds a dual master’s degree from Union Theological Seminary and Columbia University in Theology and Social Work. Claudia is an ordained minister with the United Church of Christ.

Sean Blackmon is an activist, organizer and radio host living in Washington, D.C. Originally hailing from Pensacola, Florida, Sean is active in anti-imperialist and international solidarity movements, and is a co-founder of Stop Police Terror Project DC, a group that organizes against police misconduct and mass incarceration in the nation’s capital. Sean studied journalism at his beloved Florida Agricultural and Mechanical University and is currently co-host of By Any Means Necessary on Radio Sputnik, a daily radio show that focuses on global social movements, international news and arts and culture.