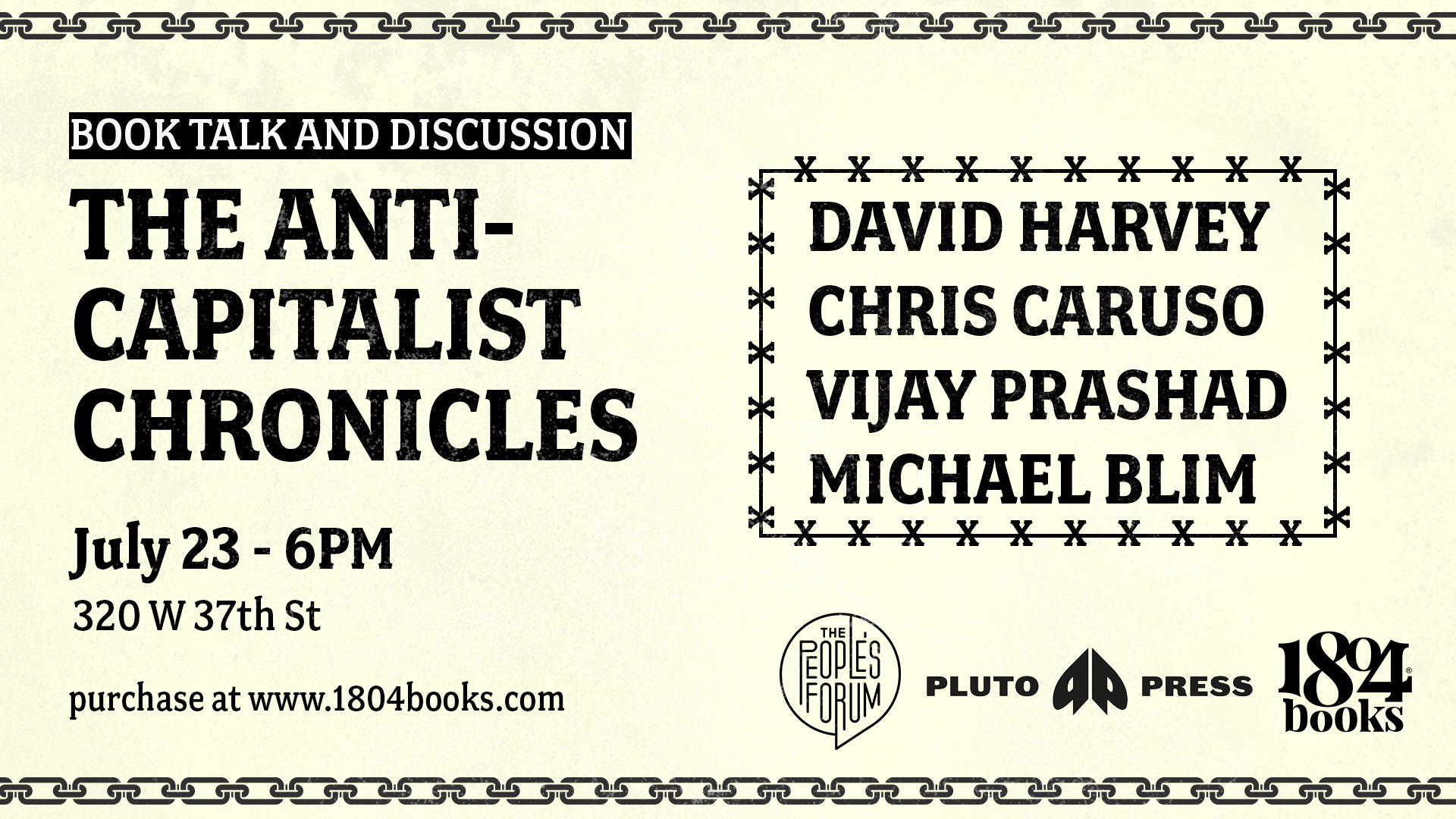 Book Talk and Discussion: The Anti-Capitalist Chronicles, A Primer for How to be An Anti-capitalist in the 21st Century

This event will be held in-person at The People’s Forum and live-streamed to Youtube.

Join us at The People’s Forum (320 W 37th St) for a book talk, and discussion, on David Harvey’s newest book: The Anti-Capitalist Chronicles, A Primer for How to be An Anti-capitalist in the 21st Century

Amidst waves of economic crises, class struggle and neo-fascist reaction, few possess the clarity and foresight of world-renowned theorist, David Harvey. Since the publication of his bestselling A Brief History of Neoliberalism, Harvey has been tracking the evolution of the capitalist system as well as tides of radical opposition rising against it. In The Anti-Capitalist Chronicles, Harvey introduces new ways of understanding the crisis of global capitalism and the struggles for a better world.

While accounting for violence and disaster, Harvey also chronicles hope and possibility. By way of conversations about neoliberalism, capitalism, globalisation, the environment, technology and social movements, he outlines, with characteristic brilliance, how socialist alternatives are being imagined under very difficult circumstances.

In understanding the economic, political and social dimensions of the crisis, Harvey’s analysis in The Anti-Capitalist Chronicles will be of strategic importance to anyone wanting to both understand and change the world.

The book is available for purchase at 1804 Books!

Chris Caruso is a popular educator, community organizer, and educational technologist. He was the founding Education Director of The People’s Forum and is a member of the Popular Education Project (PEP). A first-generation college student, Chris received his Ph.D. under Professor David Harvey at the CUNY Graduate Center.

Vijay Prashad is a Marxist historian and journalist. He is the director of Tricontinental: Institute for Social Research, a movement-driven research institution based in Argentina, Brazil, India, and South Africa. He is also chief editor of LeftWord Books, a 20-year-old Marxist publishing house based in New Delhi. Additionally, Prashad is the chief correspondent for Globetrotter and writes a regular column for Frontline (India) and BirGün (Turkey). He has written 25 books, including The Darker Nations: A Peoples History of the Third World and The Poorer Nations: A Possible History of the Global South, and has appeared in two films: Shadow World and Two Meetings. For 25 years, he was a professor at Trinity College in Hartford, Connecticut.

Michael Blim earned his Ph.D. from Temple University in 1987. He specializes in issues of political economy, equality, and labor in southern Europe and the Mediterranean. He is the author of Equality and Economy: The Global Challenge (2005) and Made in Italy: Small-Scale Industrialization and its Consequences (1990), and coedited, with Frances Rothstein, Anthropology and the Global Factory: Studies of the New Industrialization in the Late Twentieth Century (1992). He is currently writing a book about narratives of economic decline based upon new field research in central Italy. A second book on equality and global justice is also under way. Blim is the author of a monthly column called “Below the Fold” at 3quarksdaily.com.