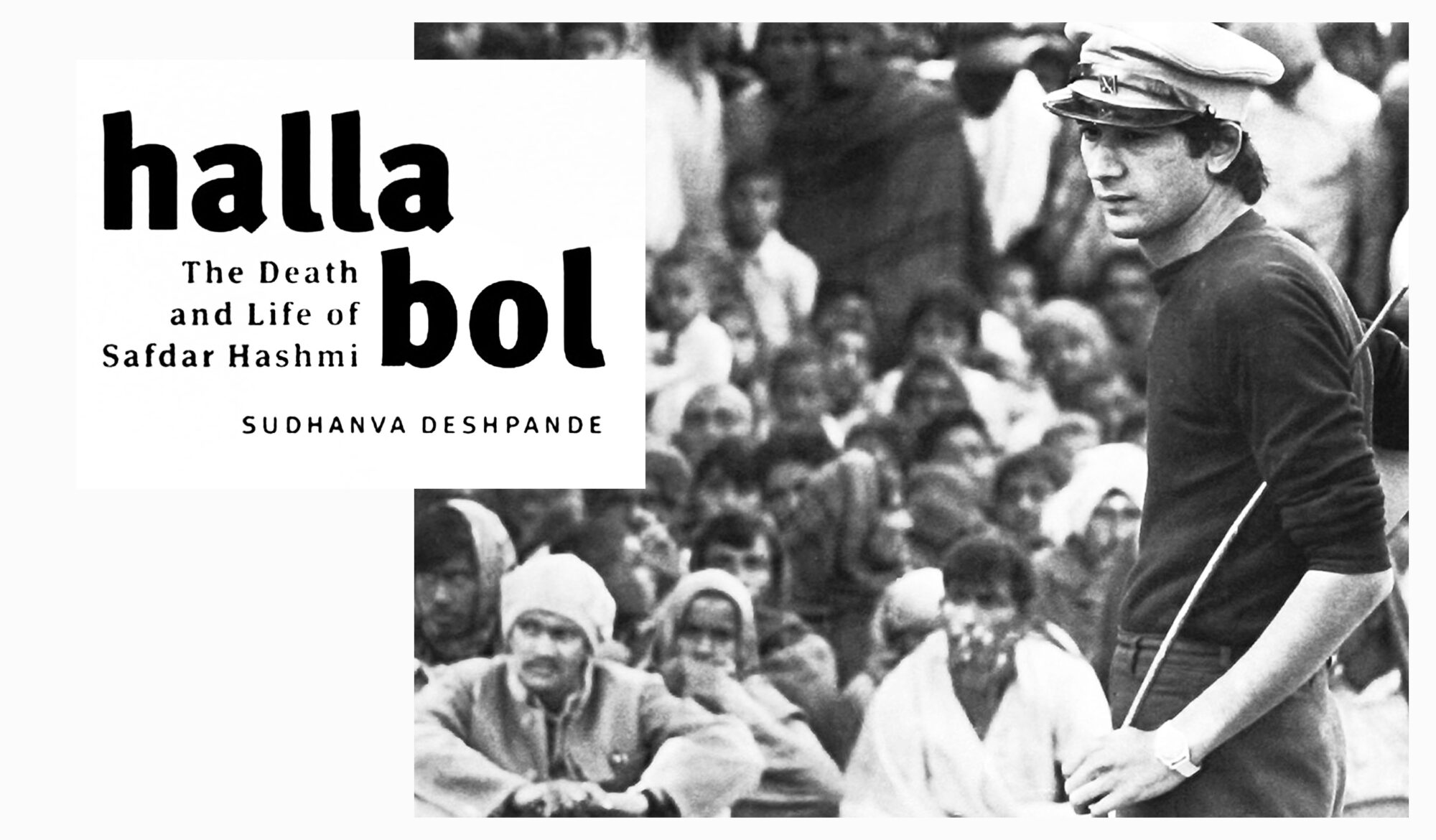 Join acclaimed novelist Amitava Kumar and theater scholar Shayoni Mitra in conversation with Sudhanva Deshpande about his new book Halla Bol: The Death and Life of Safdar Hashmi. Copies available from Word Up! and signing to follow.

In Halla Bol, Sudhanva Deshpande tells the story of Safdar Hashmi, extraordinary in all its ordinariness. On New Year’s Day in 1989, Janam, the theatre group Safdar was a part of and which he led, was attacked while performing a street play on the outskirts of Delhi. He was only thirty-four when he died from injuries sustained during this senseless attack.

Beginning with a record of this fatal attack, this vivid memoir illuminates the life of Safdar Hashmi – artist, comrade, poet, writer, actor, activist, and a man everyone loved. But this is not a book about one man or one tragic incident. Halla Bol shows us, close up, how one man’s death and life are intertwined with the stories of many people.

Sudhanva Deshpande is a theatre director and actor. He joined Jana Natya Manch in 1987, and has acted in over 4,000 performances of over 80 plays. His articles and essays have appeared in The Drama Review, The Hindu, Frontline, Seminar, Economic and Political Weekly, Udbhavna, Samaj Prabodhan Patrika, among others. He has co-directed two films on the theatre legend Habib Tanvir and his company Naya Theatre. He is the editor of Theatre of the Streets: The Jana Natya Manch Experience (Janam 2007), and co-editor of Our Stage: Pleasures and Perils of Theatre Practice in India (Tulika 2008). Since 1998, he has been Managing Editor, LeftWord Books. He cycles around town.

Amitava Kumar is a Professor of English at Vassar College. He is the author, most recently, of the novel Immigrant, Montana (Knopf), He has written several works of literary non-fiction, including the prize-winning book *A Foreigner Carrying in the Crook of His Arm a Tiny Bomb.* His other titles include Passport Photos, Bombay-London-New York, Husband of a Fanatic, A Matter of Rats: A Short Biography of Patna, and Lunch with a Bigot: The Writer in the World. Kumar’s first novel, Home Products, was short-listed for India’s premier literary award and republished in the U.S. under the title Nobody Does the Right Thing. His writings have appeared in Harper’s Magazine, The Nation, The New York Times, The New Yorker.com, Bookforum, Kenyon Review, The Chronicle of Higher Education, Critical Inquiry, Boston Review, Caravan, The Indian Express, The New Statesman, American Prospect, and numerous other venues.

Shayoni Mitra is an Assistant Professor of Theatre at Barnard College. Her interest in political theatre stems from her years as an actor with Delhi based street theatre group Jana Natya Manch. She is currently revising toward publication her manuscript, “Contesting Capital: A History of Political Theatre in Postcolonial Delhi,” which interrogates the ever shifting, adapting expressions of political theatre under different configurations of power. Before coming to Barnard, she taught at Brown and New York University in the United States and conducted lectures and theatre workshops in Jawaharlal Nehru University, Jamia Milia University and Delhi University in India. Among her current projects is her collaboration with a group of sex workers in Sangli, Maharashtra, India examining the ways in which they use theatre for their political mobilization.