Red State Revolt: The Power of Strikes, from West Virginia to LA 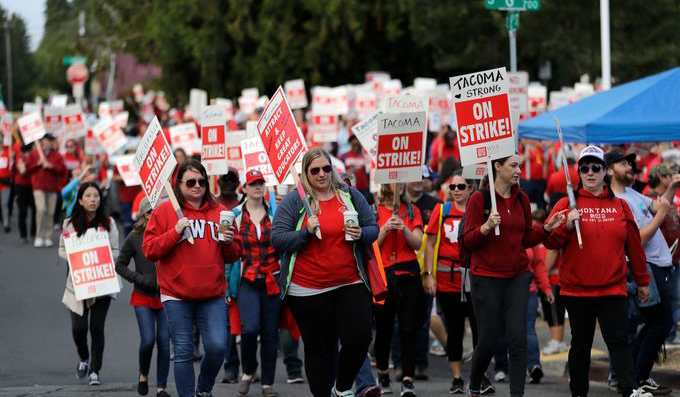 Please join us for the launch of Eric Blanc’s Red State Revolt (forthcoming from Verso) with a discussion featuring Eric, Jane McAlevey, and Emily Comer. Copies will be available for sale at the launch.

Thirteen months after Trump allegedly captured the allegiance of “the white working class,” a strike wave—the first in over four decades—rocked the United States. Inspired by the wildcat victory in West Virginia, teachers in Oklahoma, Arizona, and across the country walked off their jobs and shut down their schools to demand better pay for educators, more funding for students, and an end to years of austerity.

Confounding all expectations, these working-class rebellions erupted in regions with Republican electorates, weak unions, and bans on public sector strikes. By mobilizing to take their destinies into their own hands, red state school workers posed a clear alternative to politics-as-usual. This year, educators in LA, Oakland, Virginia, and Colorado have followed suit, demonstrating the power of working-class mobilization in transforming labor.

A former high school teacher and longtime activist, Eric Blanc embedded himself into the rank-and-file leaderships of the walkouts, where he was given access to internal organizing meetings and secret Facebook groups inaccessible to most journalists. The result is one of the richest portraits of the labor movement to date.

Red State Revolt: The Teachers’ Strike Wave and Working-Class Politics by Eric Blanc is available from Verso on April 23rd: . Copies will be available for sale at the launch.

Eric Blanc is the son of educators, a former high school teacher, a writer for Jacobin magazine, and a doctoral student in sociology at New York University.

Jane McAlevey is an organizer, author and scholar. Her first book, Raising Expectations (and Raising Hell), published by Verso Press, was named the “most valuable book of 2012” by The Nation Magazine. Her second book, No Shortcuts: Organizing for Power in the New Gilded Age, published by Oxford University Press, was released late in 2016. She is a regular commentator on radio and TV. She continues to work as an organizer on union campaigns, lead contract negotiations, and train and develop organizers.

Emily Comer is a teacher and union activist in Charleston, WV.

Endorsed by the NYC-DSA Labor Branch and the Movement of Rank and File Educators.