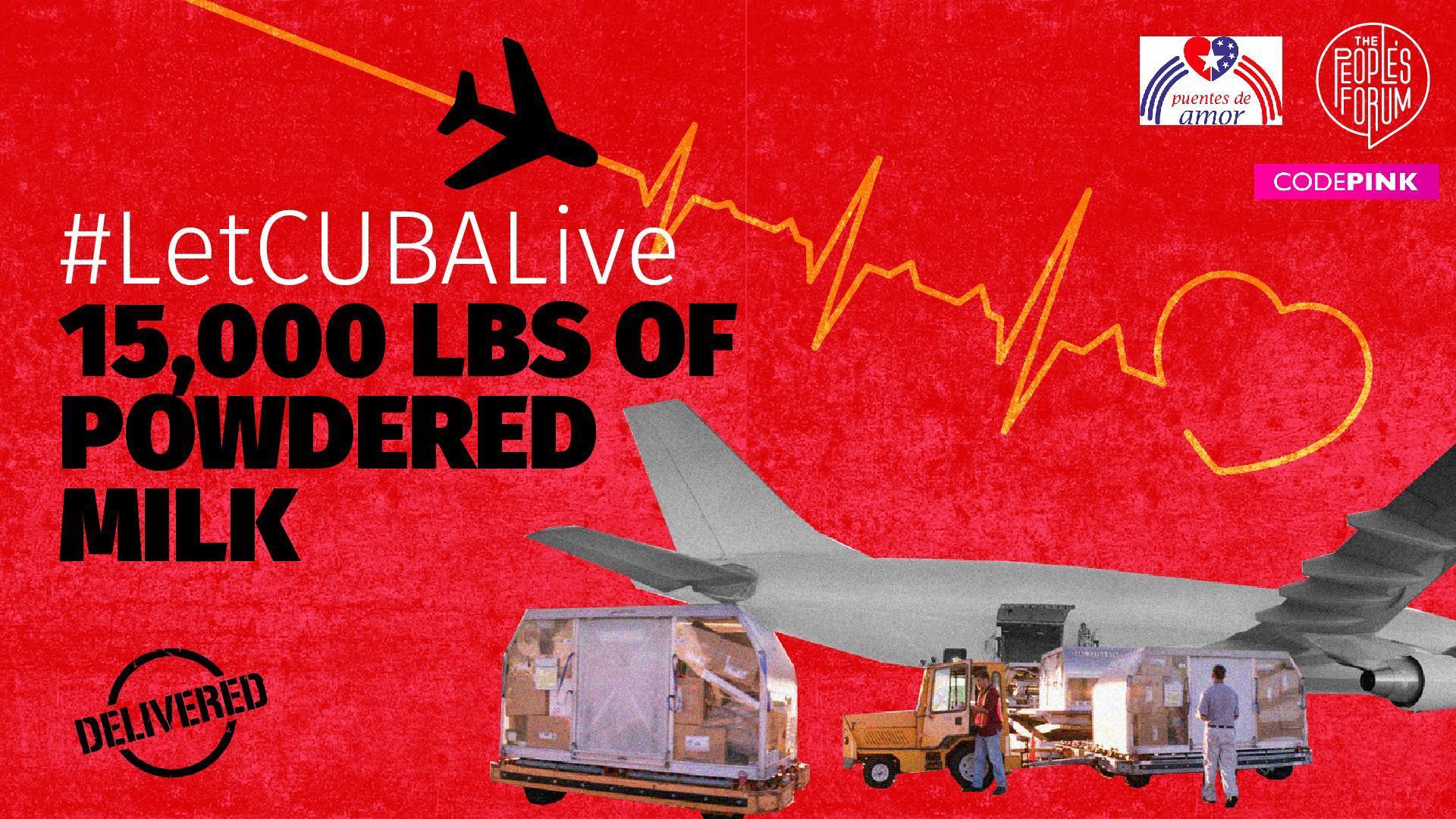 On January 15, 2022, the organizations Puentes de Amor, The People’s Forum and CODEPINK are sending a cargo plane loaded with 15,000 pounds of powdered milk from Miami to Cuba. Representatives of the organizations are traveling to Cuba with the shipment. The aid will be received by the Martin Luther King Center in Havana. It will be distributed to pediatric hospitals in Havana.

Since the pandemic and the disruption of food supplies it has caused, there has been a shortage of powdered milk in Cuba, which is normally given out by the state—for free—to children, pregnant women, the elderly and people with medical needs. Due to the reluctance of U.S. companies and banks to deal with Cuba for fear of running afoul of U.S. sanctions, Cuba buys imported milk—at an inflated cost—from places as far as New Zealand and Uruguay.

The funds raised for the milk and the charter flight came from an outpouring of individual donations from people across the United States, including many Cuban Americans. It is an expression of the growing rejection among the US public of their government’s economic policies aimed to strangle the Cuban economy.

This Food for Cuba campaign builds on the November 15, 2021 shipment of 18,000 pounds of food that the Martin Luther King Center distributed mainly to children’s centers and homes for the elderly in the eastern provinces of Holguin, Granma and Guantanamo. It also follows the tremendous success of the Syringes for Cuba campaign, through which a coalition of U.S. groups raised over $500,000 to purchase 6 million syringes for Cuba’s COVID-19 vaccination drive.

“One more time, Cuban Americans show their solidarity with their brothers and sisters on the Island,” said Carlos Lazo of Puentes de Amor. “With this gesture, they express their desire to build bridges of love between the people of Cuba and the USA.”

The donations are a response to the dire economic situation in Cuba, which is largely a result of the COVID-induced shutdown of the tourist industry and a tightening of the embargo under Trump. Reversing the gains made by the Obama-Biden administration in normalizing relations with Cuba, Trump added over 200 restrictive measures, including limiting remittances Cuban Americans can send to their families, stopping U.S. flights to every city but Havana, prohibiting cruise ships from docking in Cuban ports, and adding Cuba to the list of state sponsors of terrorism. Despite candidate Joe Biden’s pledge to “promptly reverse the failed Trump policies that have inflicted harm on the Cuban people and done nothing to advance democracy and human rights,” President Biden has continued Trump’s policy of maximum pressure and promoting “regime change.”

“It is tragic and infuriating to see how President Biden’s policies are hurting millions of Cubans and exacerbating tensions on the island, especially at a time when Cuba’s economy has been battered by the COVID-19 pandemic,” said CODEPINK co founder Medea Benjamin. “Our donation is a sign that many people in the United States reject these aggressive actions and instead want to extend a helping hand to our neighbors.”

“Our donations in no way compensate for the harm caused by the U.S. blockade,” said Manolo de los Santos, executive director of The People’s Forum. “But they show our desire to stop our government from trying to strangle the Cuban economy and make people’s lives miserable. It shows our desire to let the Cuban people determine their own future, free from U.S. interference.” The groups sending the aid are also pressuring the administration and Congress to lift the blockade.